Welcome to a world of enchanted potions and mysterious books in The Magic Cauldron Enchanted Brew, the 7×7 videoslot that pays in clusters of at least 5 matching symbols. Winning symbols are the ingredients to create an enchanted brew that comes in shape of a modifier, while marked symbols leave Wilds on the grid after forming winning combos. Fill the cauldron with symbols five times on a spin, and master the Potion of Darkness or the Unicorn Dust, which come with multipliers of up to 20x.

RTP
96.44%
Max Multiplier
5000x
Reels x Rows
7 x 7
Lines
20
Release Date
May 27, 2021
Upcoming Tournament
The tournament with this game starts soon! Join it for free and have a chance of winning real cash prizes!
See More Tournaments
Socialtournaments.com is a free to play social casino designed to let players try our games before they decide to play for real money wagers with licensed B2C operators. Players are not eligible to play where free play games with prizes are prohibited. Socialtournaments.com is unlicensed.
Daily

The Magic Cauldron – Enchanted Brew seems to take place in the dungeons of a magic school, where that professor, who everybody thought is the villain teaches his potions student “how to bewitch the mind and ensnare the senses”. Vials of different shapes and sizes land on reels, along with the book and the winged potion that act as the Wild and the Unicorn Wild, completing the magic-themed scene. The game also features a Progressive Feature that connects the boiling cauldron to the five available modifiers.

Learn the spells and prepare an elixir of winnings of up to 5,000x the bet. You do not need a special brewing guide with notes from a specific, gifted wizard. All you have to do is land enough clusters of symbols to fill the cauldron.

The Magic Cauldron – Enchanted Brew slot features a rare layout with 7 rows and 7 reels, where symbols pay in clusters of at least five of the same kind connected horizontally or vertically. The RTP has an above-average value of 96.44%, while the volatility stays high throughout the game.

The symbols divided into high-paying and low-paying are brought on the grid by the tumble feature that remains active during the entire gameplay. The game also offers a bunch of bonus rounds for all kinds of players (or wizards). Five modifiers (or spells, if you will) await to be triggered if you fill the cauldron from the left side of the screen with symbols and the two features centred around the Unicorn Wild and the neon symbols.

As mentioned before, The Magic Cauldron – Enchanted Brew comes with two types of standard paying symbols, high-value and low-value:

The magic book that holds the recipes for the most strong potions is the Wild, which can replace all the other symbols, except for the Unicorn Wilds. It can land anywhere on the reels brought by Elixir Wilds or the Moon Seed feature. Also, the Wild can connect to form multiple winning combos with different symbols. Quite a flexible Wild, if you ask us.

The Unicorn Wild is the winged elixir that looks a bit like the potion that can make the drinker lucky for a period of time. You know what we are talking about!

Anyway, this symbol can substitute all the others but the Wild and hits as a result of the Unicorn Wild round. Like the classic Wild, the Unicorn Wild can also form multiple winning lines with different types of paying symbols.

The Magic Cauldron – Enchanted Brew slot has more to offer than meets the eye. The progressive feature linked to the gameplay can randomly trigger a modifier, while the Unicorn Dust feature adds a multiplier of up to 20x to all Unicorn Wilds.

This feature is part of the gameplay in many of our slots, such as Sweet Bonanza or Gates of Olympus. Thus, if you have played Pragmatic Play slots before, you already know that this feature removes the symbols that formed a winning combination, making room for new ones that glide from above the reels. The tumbles continue until there are no more wins as a result of a tumble.

This feature does not have to be triggered as it is connected to the mechanism of the game. In other words, the exploding winning symbols are counted in the cauldron near the reels. Collect 25 symbols and activate one out of the five modifiers. The maxim number of symbols you can collect from a spin, tumble sequence, or a modifier is 125. This way, you can play all five modifiers in order.

The first four modifiers are triggered randomly, while the fifth one is only for the most powerful wizards:

This round is triggered when 3 or 4 Unicorn Wilds hit with a starting multiplier of 1x or 2x attached. For all subsequent tumbles when a Unicorn Wild is part of a win, it stays on the screen, moving to an empty position. Its multiplier also increases by 1x up to a maximum of 20x. If you create a win with more than one Unicorn Wild, the game adds all multipliers part of the win and applies the sum to the combination.

Because this videoslot wants all players to have a chance at winning, it can add 4 to 8 Wilds in random places on the grid, if the previous spin did not bring any wins.

You will notice that some low-value symbols have a neon mark on them. This is the Moon Seed Mark that can appear on all instances of a low-paying symbol for the spin and the following tumbles. If you form a winning combo with at least 5 marked symbols, 2 Wilds will be left behind after the symbols explode. This feature is present in both the base game and during the modifiers.

If you want to stir the magical potion in The Magic Cauldron – Enchanted Brew, you need to place a bet of at least €0.20. Adjust the bet and the coin’s value using the (+) and (-) buttons and set your total bet as you wish. Keep in mind that the maximum bet that can be placed is €100.

Learn the right enchantments and trigger all modifiers to have a chance of getting your hands on the max award of 5,000x the stake. Our cauldron accepts all kinds of symbols, so you have plenty of occasions to hit one of the five modifiers.

The Magic Cauldron – Enchanted Brew really makes you feel like you are inside a wizard’s hut. The parchments, the quill pens, and the traveller’s journal from the right side of the reels made us think of Merlin, the famous wizard who helped King Arthur built Camelot. However, the abundance of magical symbols and the self-stirring cauldron can just as well belong to a potion master. Regardless of the option you prefer, this online slot has a striking mystic vibe that goes perfectly with the mysterious track that reminds us of another magic-related title, Voodoo Magic.

The Magic Cauldron – Enchanted Brew slot combines cluster wins with a progressive feature that allows you to trigger one of the five available modifiers. Although all modifiers can award considerable prizes, is the Potion of Darkness that offers a twist, removing the low-value symbols from the grid, and filling the empty cells only with high-paying ones.

Start brewing your potions, and get ready for colossal wins to hit! Check out the current and upcoming slots tournaments and create an account to have a chance of winning real money prizes. 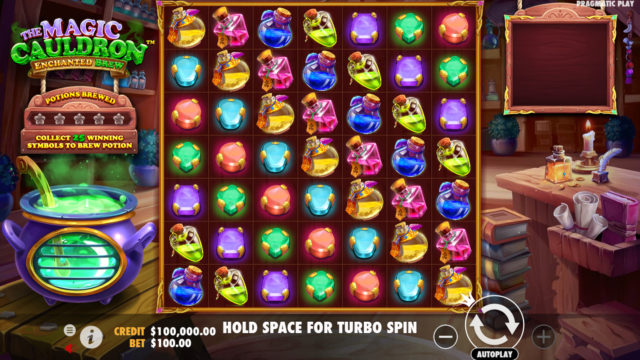 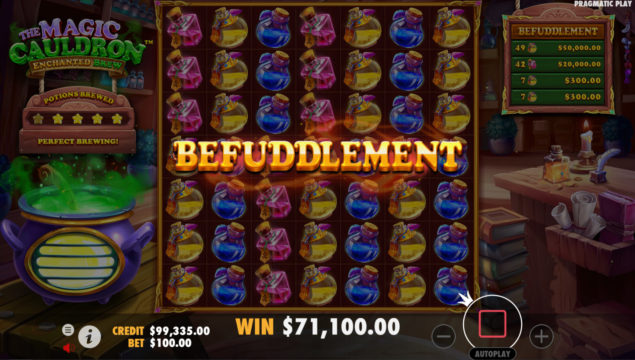 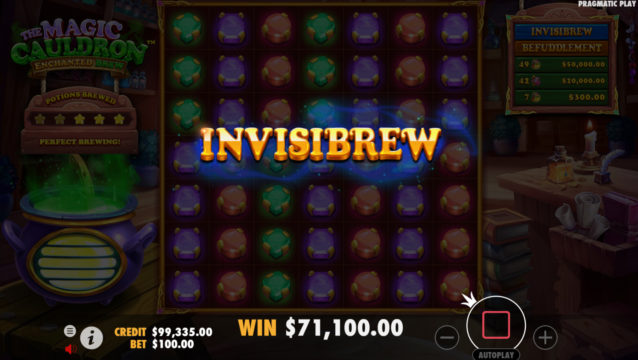 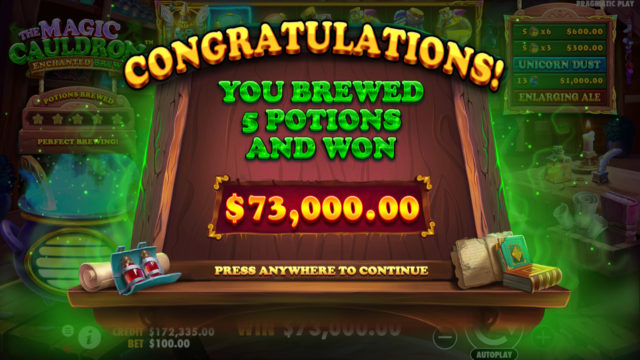 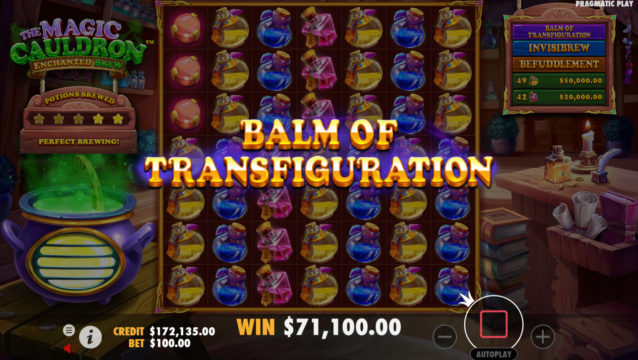 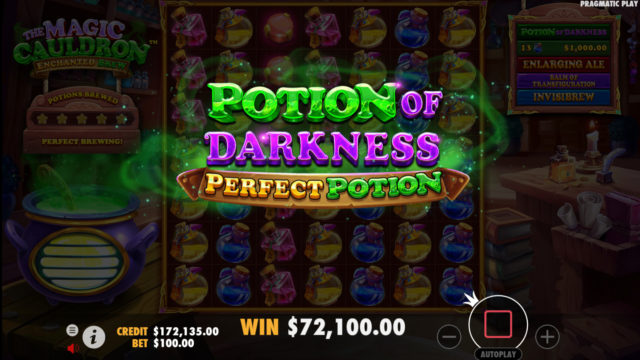 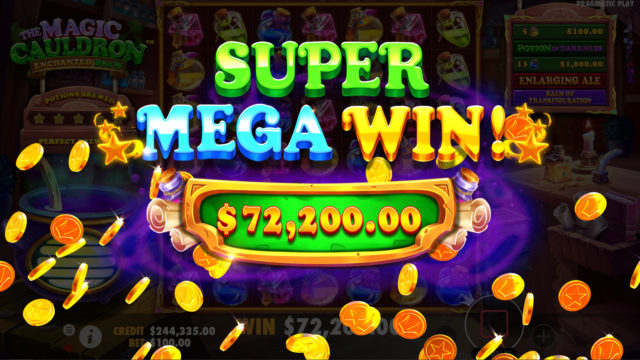 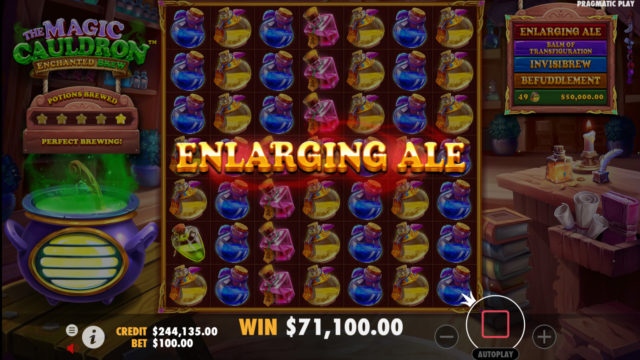 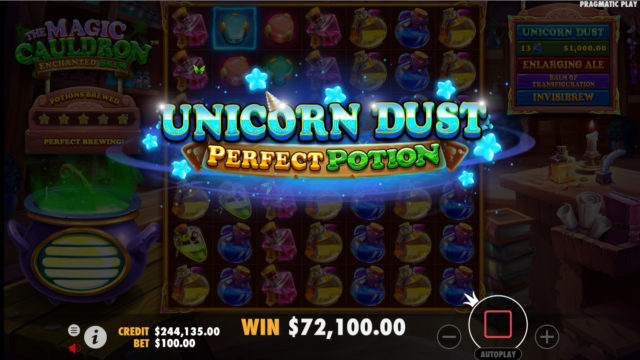 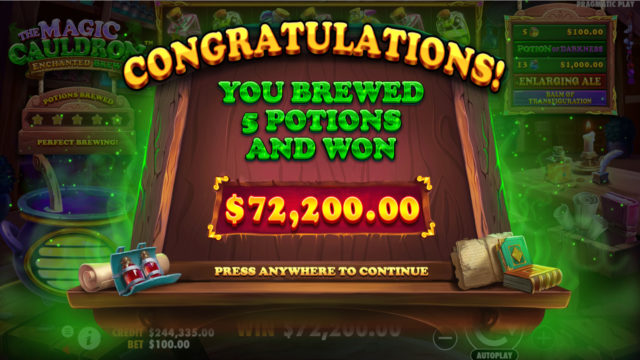