Explore the deep in Release the Kraken, the 5×4, 20 lines video slot. Discover the mysteries of the ocean with random features possible at any spin and get the treasure from under the Kraken’s nose in the progressive multiplier, Roaming Wilds Free Spins Round. 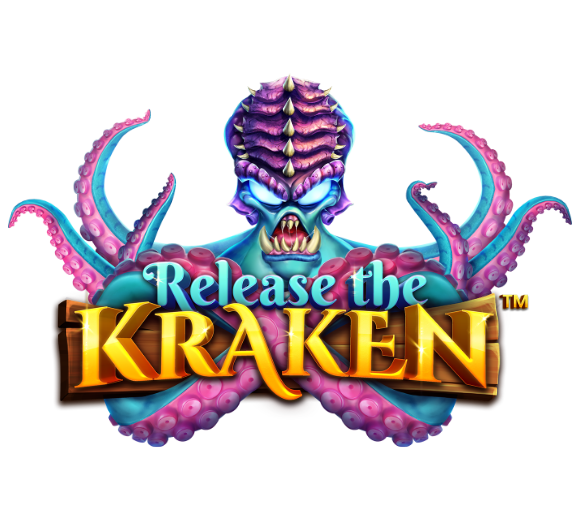 The last thing you remember is the terrified voice of a crew member shouting that the ship has been attacked by a marine monster and it’s sinking. You remember the ship swinging like crazy and the cold water touching your skin. You’ve been thrown in the ocean and you cannot reach the surface, no matter how hard you try.

In mari multa latent, goes the old saying: “In the ocean many things are hidden”- but not all of them are evil. The Kraken may look dangerous, but he saved you and now he wants to make it up for destroying your ship.

Release the Kraken is an engaging slot from Pragmatic Play that comes packed with four extraordinary features and a potential of winning up to 10,000 times your stake. The Kraken collected all kinds of gems and golden treasure throughout the years he’s been living on the bottom of the ocean.

Release the Kraken is a 5 reels and 4 lines slot game that can award you with up to 10,000x your stake. This game has 20 paylines and an RTP value of 96.5%. The volatility of this game is rated as high – and when you think you’re on the bottom of the ocean.

The Kraken is the King of the Ocean in this slot game, so he collected all high paying symbols the sea has to offer:

The Wild Symbol looks like an air bubble with the word WILD in the middle. This symbol can replace any other, except for the Bonus, Free Spins and Chest Bonus ones – the Kraken has a special plan for them. Land 5 Air Bubble Symbols on the reels and you’ll be awarded with 25x your bet. The Wild Symbol can hit anywhere on the screen, so may your reels be as bubbly as they can be.

The Release the Kraken slot provides three high-awarding features that will make sure you are rewarded with winnings as big as the ocean.

In the base game, on any spin, 3 tentacles holding 3 wooden signs that say “Pick me” may pop up. Select a tentacle to trigger one of the random features:

All winnings are paid out when the round ends.

An Infectious Wild Symbol lands when the reels stop spinning and turns adjacent symbols into Wild Symbols. May the Kraken’s poison spread fast and on all symbols around him.

Land 2 Bonus Symbols on reels 1 and 3 and one Chest Bonus Symbol on reel 5 to trigger this round. The game takes you even deeper in the cold, dark waters. Once you hit the bottom of the ocean, you’ll see the Kraken holding 3 chests. This is the newest treasure he found and he’s really proud of this discovery.

You’ll have to choose one of the 3 chests that’ll award you real money prizes. You can pick chests until you hit the Collect option. This will end the Sunken Treasure Bonus Feature.

Activate this round by landing 2 Bonus Symbols on reels 1 and 3 and 1 Free Spins Symbol on reel 5. The game takes you to the bottom of the sea again where you’ll have to select as many chests as possible until the Collect message shows up. Prizes can be +1, +2 or +3 Free Spins. 40 paylines are in play during this feature. The round is played with the total amount of free spins won before revealing the Collect item, so choose wisely.

The feature starts with a x1 multiplier. Hit an Air Bubble Wild Symbol and the multiplier increases by 1x. All Wild Symbols that hit the reels remain on the screen, changing their position randomly on every spin.

During the base game you have the option to buy the Free Spins Feature if you pay 100x your stake. The reels start spinning and land 2 Bonus Symbols on the first and third reels and a Free Spins Symbol on the fifth. There’s no way to escape the Kraken’s plan to make you the richest man/ woman in the ocean.

Bets range between €0.20 and €100 – the ocean accepts both small and big fish. Regardless of how much you choose to bet, you have the same chances to get the treasure worth 10,000 times your bet that’s sunken on the bottom of the ocean.

The first screen shows a wrecked ship (probably yours) sunken in the depths of the ocean, behind the semi-transparent reels. Bright corals and peculiar looking sea plants can be seen on both sides of the screen. Round air bubbles rise to the surface from time to time.

Trigger any feature and the Kraken will angrily glide across the screen, surrounded by air bubbles. He is so fast you can see only a pink splash crossing the screen.

During the Free Spins Feature you’ll see the Kraken in action, fighting a pirate’s ship. Poor fellows don’t stand a chance against the giant octopus.

A “the-adventure-begins” kind of music follows you in the dark waters. Once in a while you can hear the Kraken’s distinct growl – he’s so close to you. Activate any bonus feature and the music picks up, becoming more alert. If you listen closely, I think you can actually hear the Kraken saying “Release the winnings!”. Such a well-intentioned invertebrate!

Release the Kraken is a videoslot with a bunch of features that’ll help you win up to 10,000 times your bet. Trust your good pal Kraken, and you’ll multiply your winnings in no time.

The Kraken puts a tentacle around you and heads to the surface. He releases you when you’re on top of the water, so you can swim by yourself to the not–so–distant shore. Visit the websites of our casino partners if you want to pay a visit to your good friend. We’re sure he’ll be more than happy to see you again. 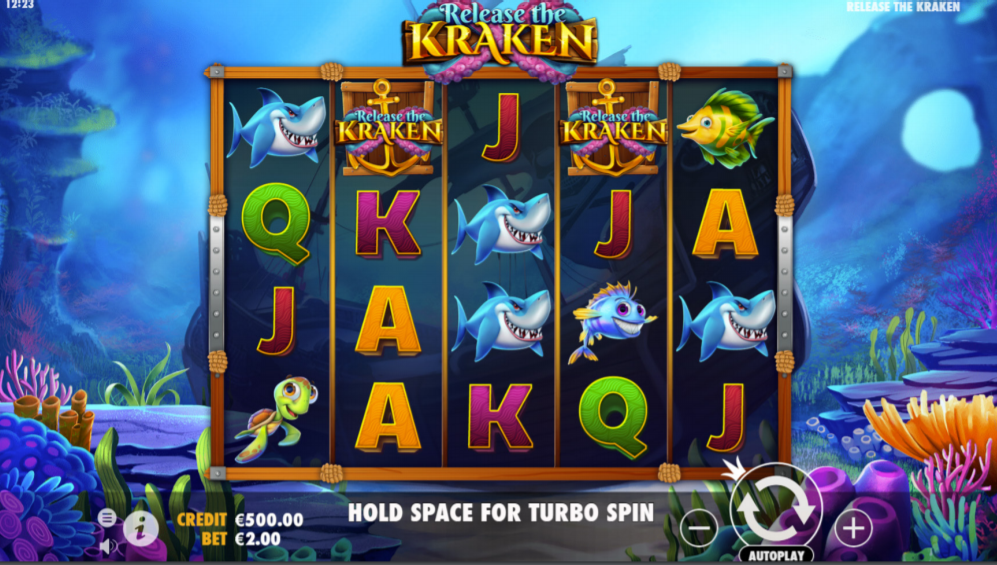 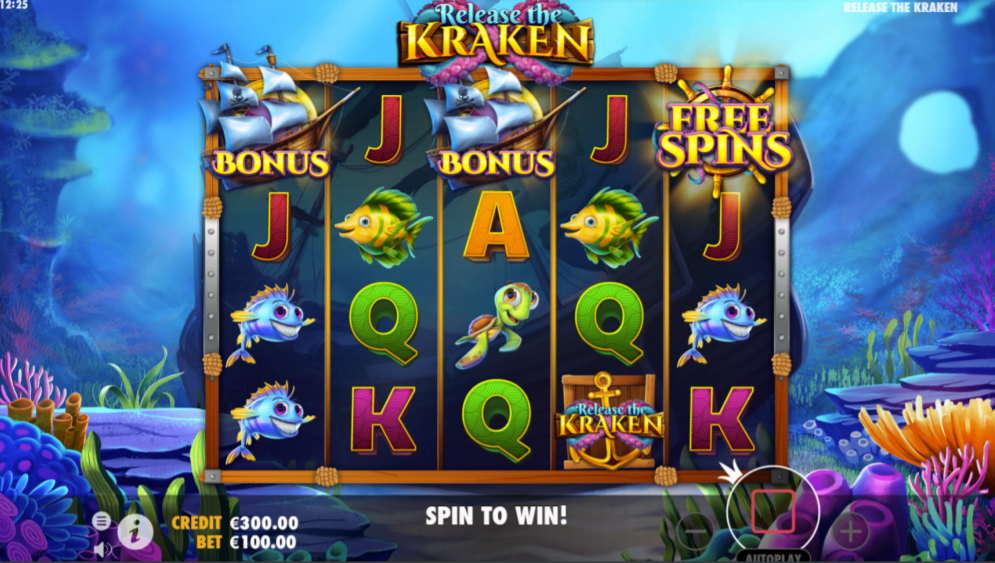 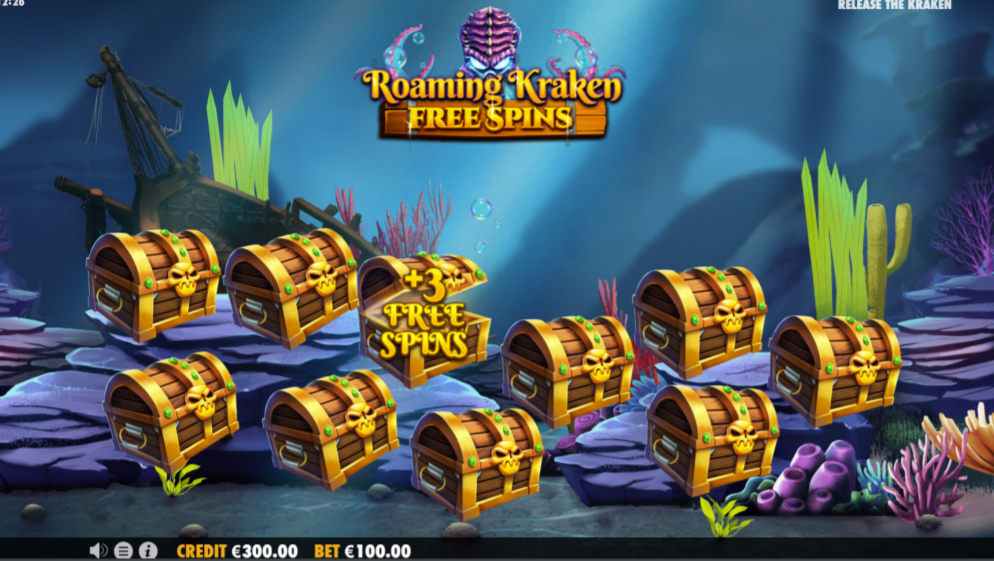 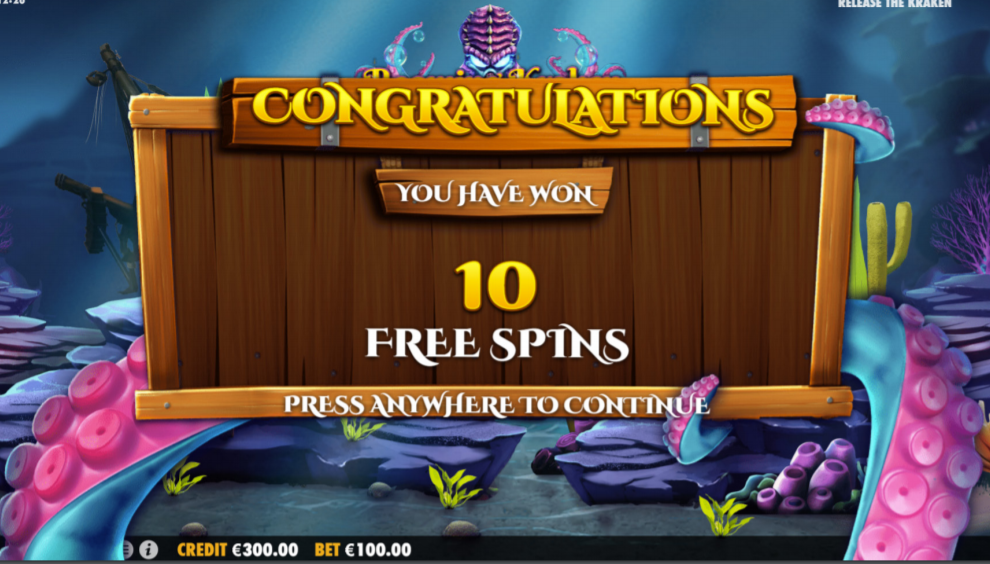 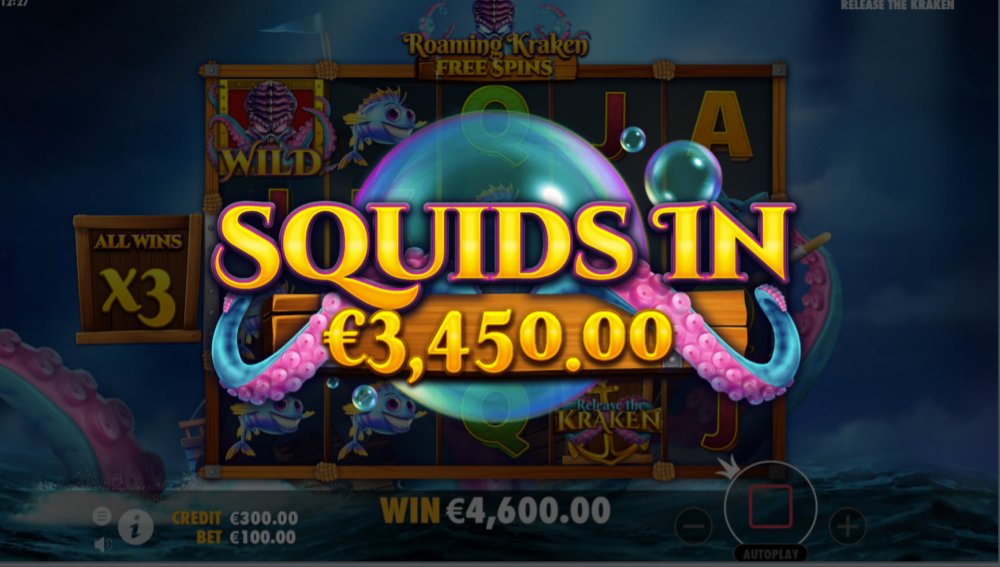 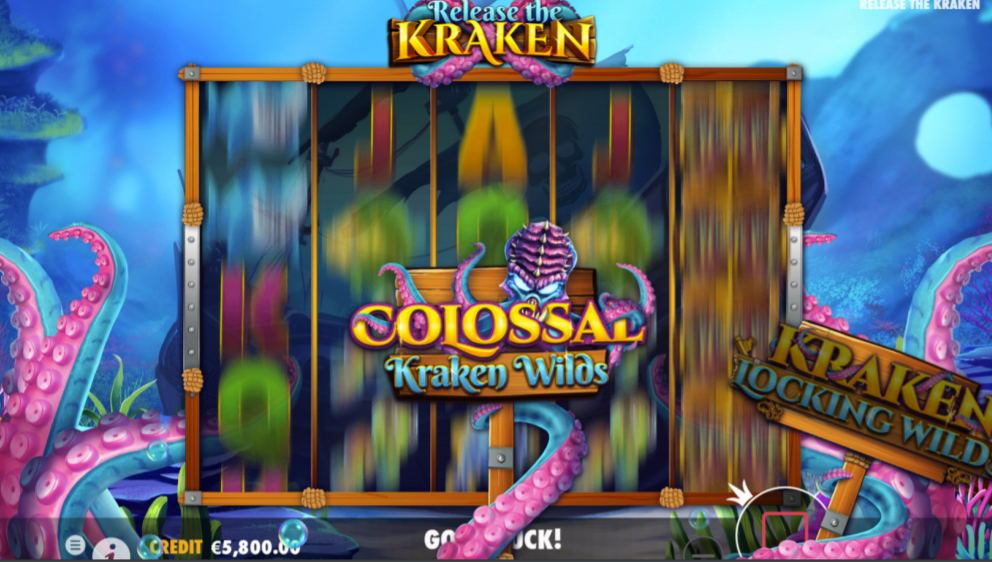 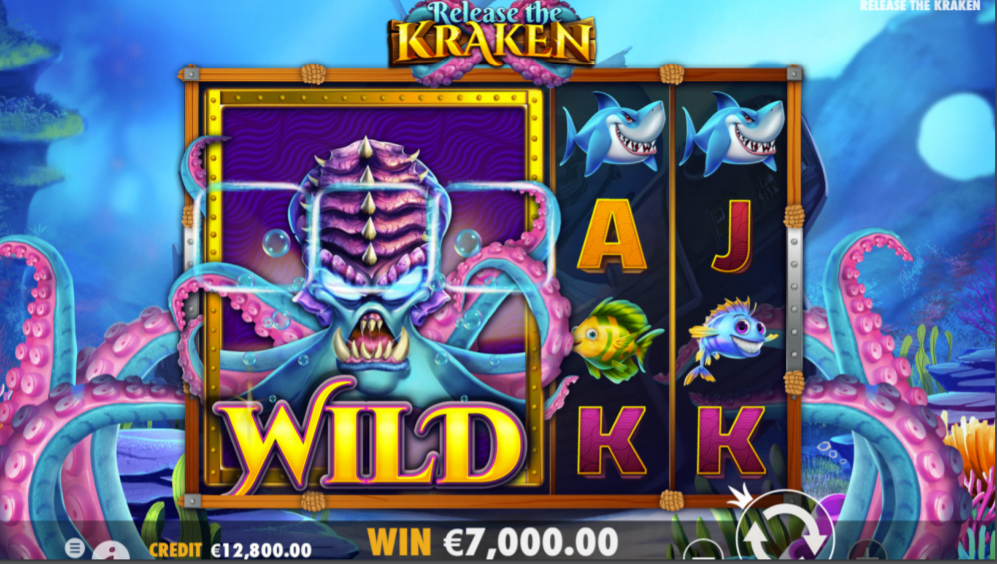 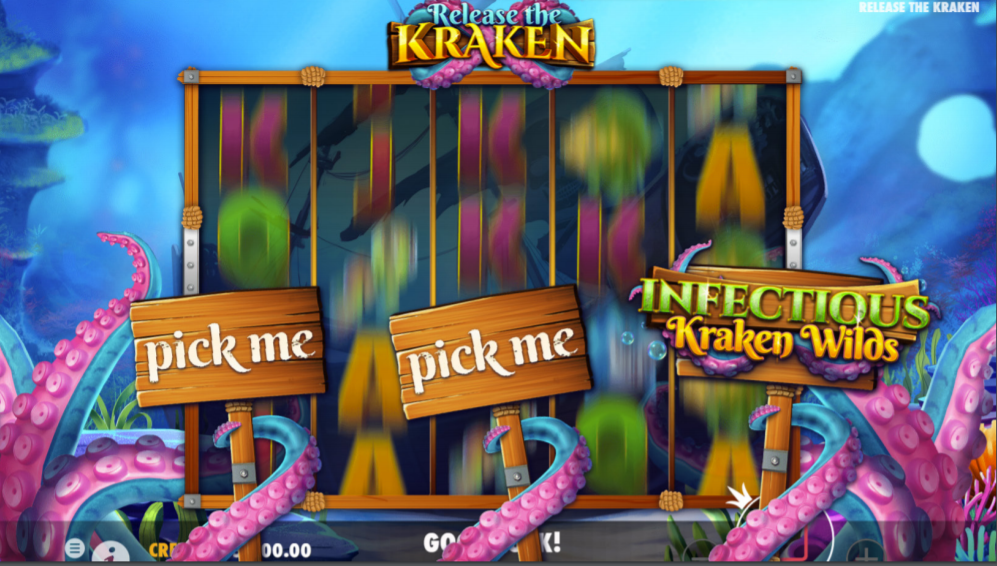 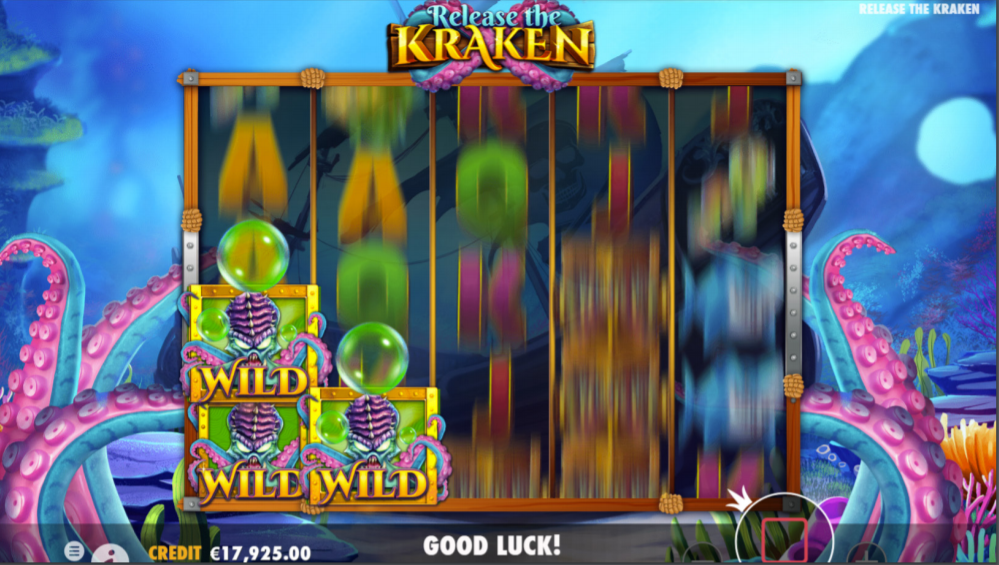 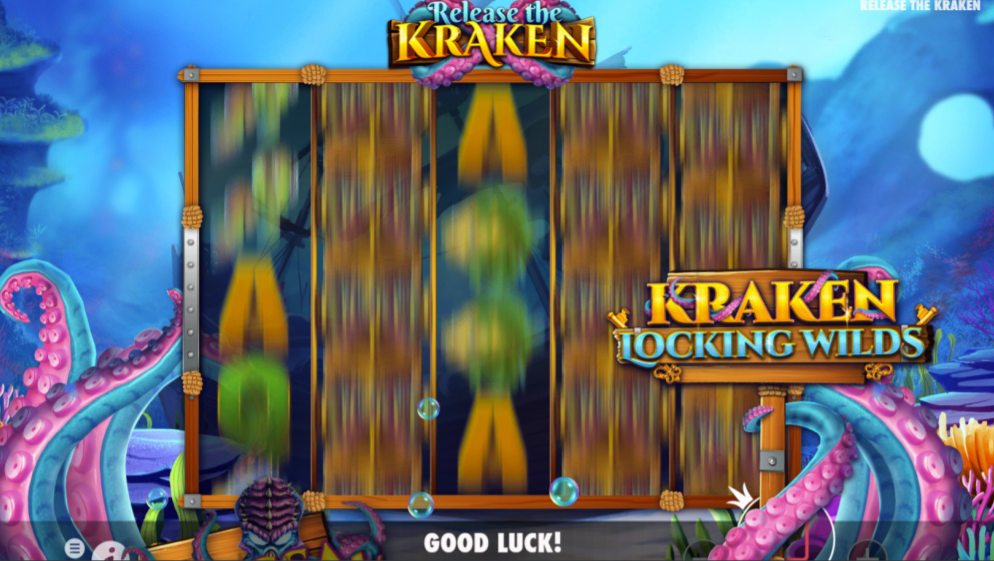 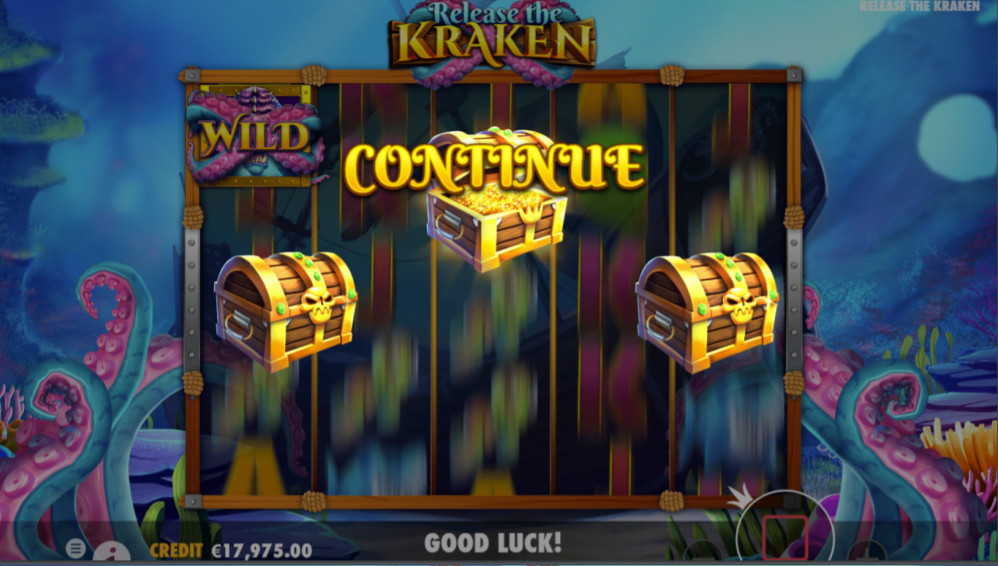 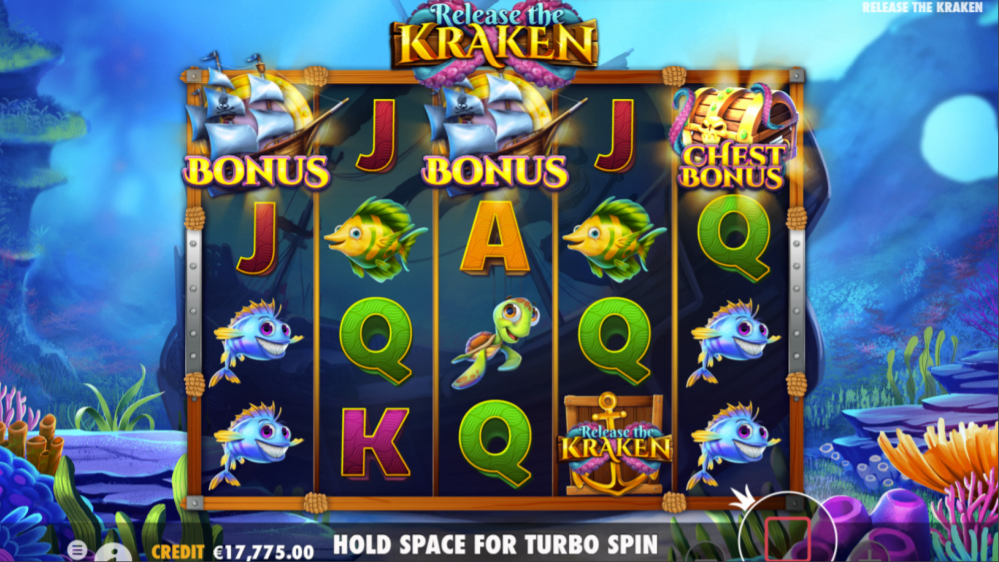 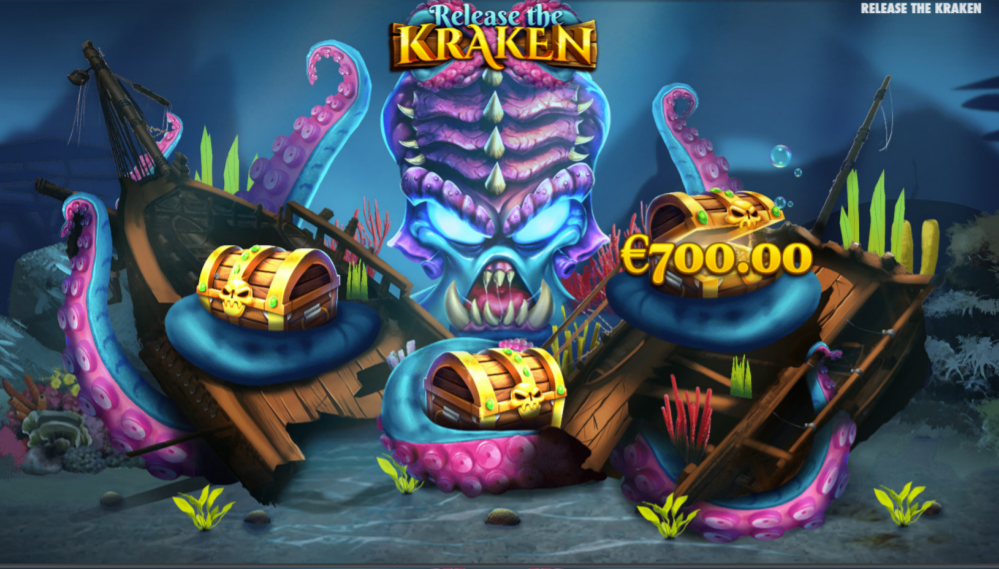 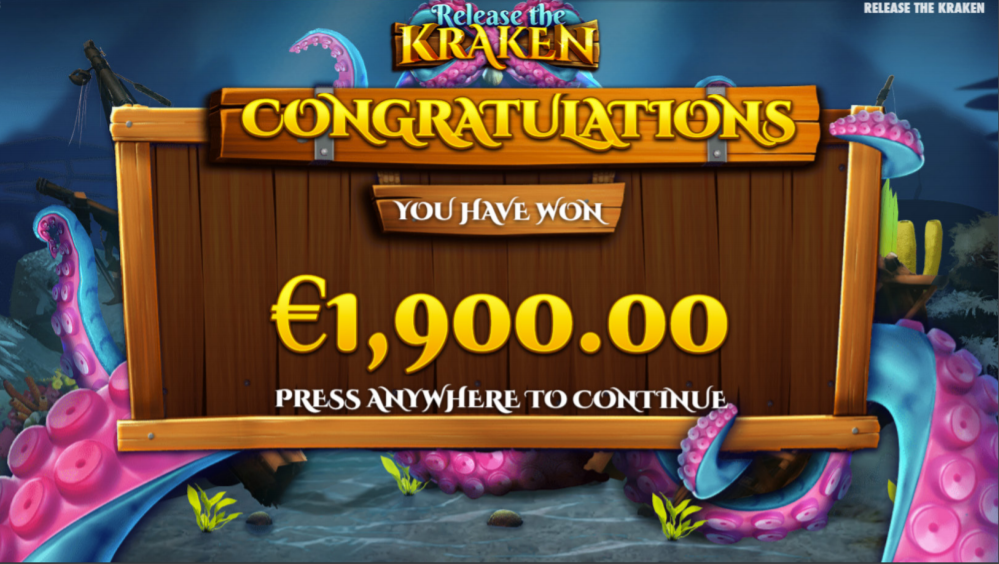 Big Wins on Release the Kraken