John Hunter and the Tomb of the Scarab Queen

Find the riches of Ancient Egypt in Scarab Queen, the 5×3, 25 lines videoslot. The reels are choke full of money symbols to win, increase their value, multiply, expand or respin with the Collect symbols. In Free Spins, the last respin gives the chance to win the value of all money symbols gathered in the round, for extra big wins!

Put on some sunscreen, hop on your smiling camel and follow your good-old friend John through the sandy dunes, to the antique pyramid, where the Egyptians hid the tomb of their beloved Scarab Queen.

RTP
96.5%
Max Multiplier
10500x
Reels x Rows
5 x 3
Lines
25
Release Date
Sep 26, 2019
Upcoming Tournament
The tournament with this game starts soon! Join it for free and have a chance of winning real cash prizes!
See More Tournaments
Socialtournaments.com is a free to play social casino designed to let players try our games before they decide to play for real money wagers with licensed B2C operators. Players are not eligible to play where free play games with prizes are prohibited. Socialtournaments.com is unlicensed.
Daily

John Hunter is ready to embark on his third mission: finding the Tomb of the Scarab Queen. He needs your help once again to overcome all obstacles the Egyptians put in his way. This time, our hero came prepared with new tricks up his sleeve, epic features and symbols to make sure your winnings get as high as they can be.

Legend says that in the tomb of this beautiful Egyptian queen unbelievable treasures of up to 10,500x your stake can be found. Keep in mind that the key symbol in this slot game is the Scarab – it can trigger the Money Collect Feature and multiply all your winnings before you can say Egypt.

John Hunter and the Tomb of the Scarab Queen falls in the classic 5 reels-3 lines videoslot category. With 25 paylines, an RTP of 96.5%, and a medium volatility, this game can award you 10,500x your initial bet. Long live the Queen!

This isn’t John Hunter’s first rodeo, so he knows how important the right tool can be when used at the right time. Your partner managed to get his hands on some pretty powerful symbols:

The mighty Scarab Queen is the Wild Symbol. This one can replace any other symbol, except for the Scatter, Money and Collect Symbols. She doesn’t have that much power, she’s not Cleopatra after all. The Scarab Queen Symbol can land on reels 2, 3, 4 and 5.

The Scatter Symbol looks like a pyramid in daylight. It can pay 1x your total bet if 3 of them land on the reels. The Pyramid Symbol also triggers the Free Spin Feature.

This is an adventure like no other, so our hero needs extra help to succeed in his mission. The Gods of Egypt were kind enough to give John a special gift: The Collect Symbols. These symbols unlock The Money Collect Feature.

Two royal features come to John’s aid and lead the way to the Egyptian treasure through the windy desert. One of these features collects all the winnings that appear on the reels, while the other rewards you with Free Spins.

Land one of the Collect Symbols and trigger this feature. You’ll recognize them easily because they look like scarabs. All Collect Symbols appear on reel 5, except for the Money Symbol. The myth says the Scarab Queen really loved this little beetle. Some people love dogs, some love reptiles and others love scarabs. Who are we to judge?

There are 6 possible ways the Money Collect Feature can go:

Money Symbol – appears on reel 1, 2, 3 and 4 and takes a random value from a predefined set at each spin;

This feature is triggered when 3 Pyramid Symbols land on the reels. You and John Hunter enter the old and full of gold pyramid and wait for the 8 awarded Free Spins to end in order to collect your winnings. The Money and Collect Symbols are active during this feature. All Money Symbol values are collected and added to a bar displayed in the top right corner. Once all spins have been played, it’s time for the big finale. A massive Scarab Money Symbol is added to fully cover the first 4 reels followed by a spin of the 5th reel. This super big Scarab Money Symbol has the value of the bar. If a Collect Symbol hits, the full value of the bar is awarded.

Land 3 Scatter Symbols on reels 2, 3 and 4 in this round and the Free Spin Feature is retriggered. The generosity of the Scarab Queen knew no bounds. That’s why her people loved her so much.

Bets range between €0.25 and €125, so you can join in on the fun without breaking the royal piggybank. John Hunter endures the heat of the desert and tries to overcome the traps the Egyptians set on his way for a maximum win of up to 10,500x your stake. He would do anything to see you grab that gold treasure.

This John Hunter slot is set on a desert backdrop, with gold sand lines and impressive pyramids that can be seen in the distance. The clouds look low and heavy, as if signaling the approach of a sandstorm of huge prizes.

Did you just see a Collect Symbol on reel 5 firing shiny, gold bullets to a Money Symbol on reels 1, 2, 3 and 4? That’s just the visual effect that accompanies the Money Collect Feature, so don’t be alarmed – it’s good news of the highest caliber.

A rhythmic Egyptian-inspired soundtrack accompanies you in this adventure. When you trigger any feature, the music intensifies and some winning sounds are added.

In John Hunter and the Tomb of the Scarab Queen slot all you need to do is land as many scarabs as you can. This tiny creature is the key to tremendous winnings!

Now that you found the big treasure, it’s time for you and John Hunter to say goodbye for now. You and John can get together again and relive this adventure. All you have to do is click the “Play” button and you’ll be in the desert again.

Visit the pyramid of the great Pharaoh Tut in John Hunter’s latest adventure, John Hunter and the Book of Tut, an engaging 5×3 slot with 10 paylines that can reward you with a small fortune of up to 5,500x your bet. 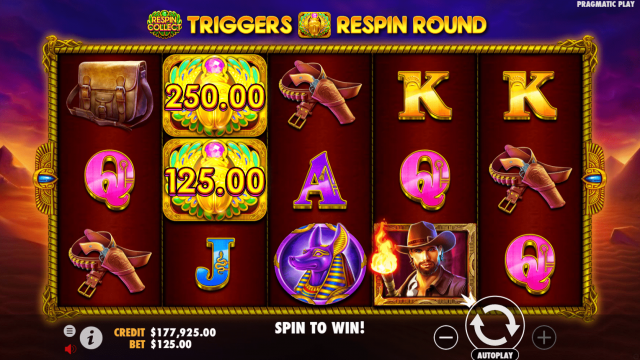 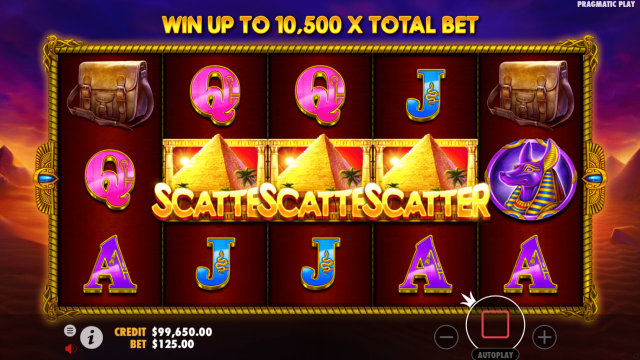 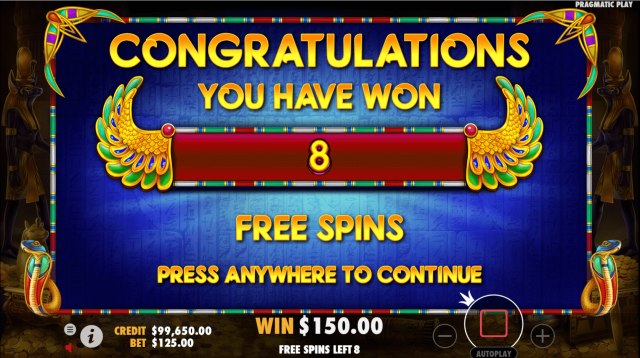 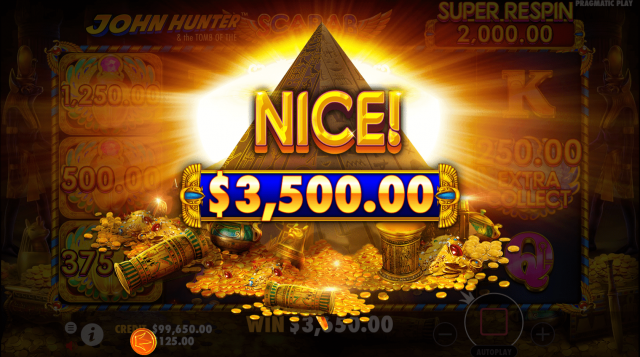 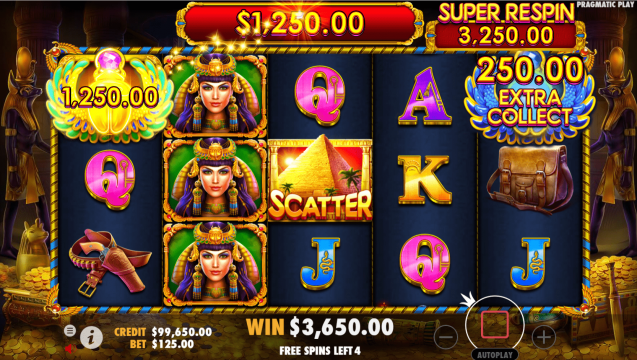 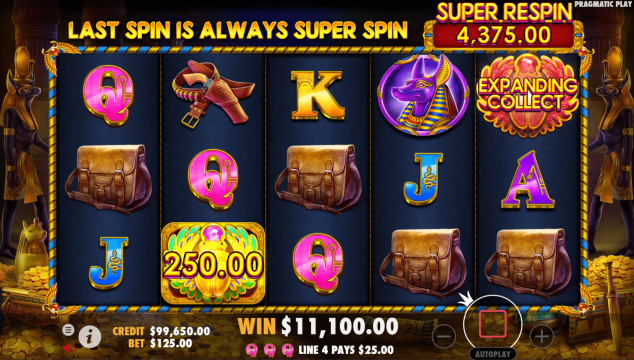 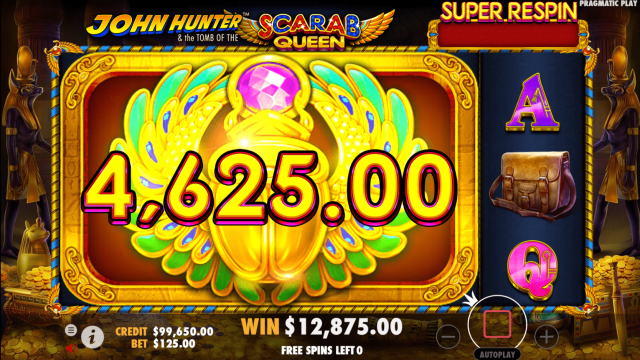 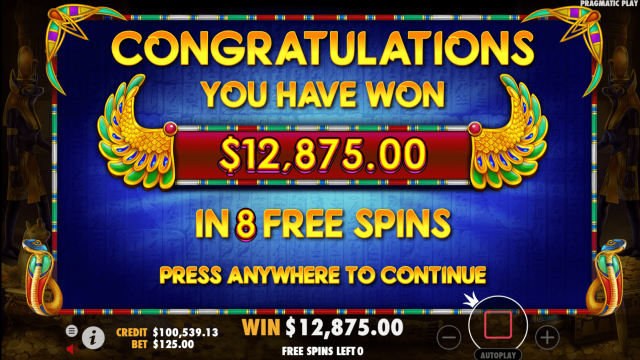 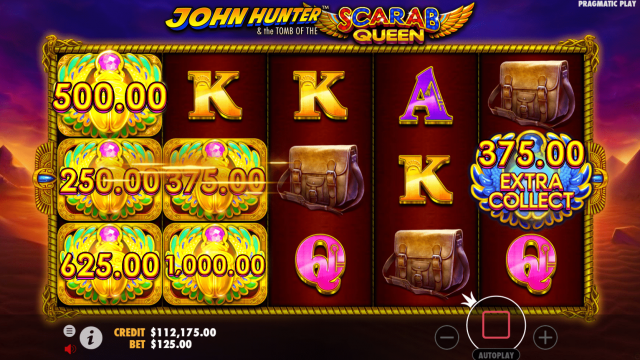 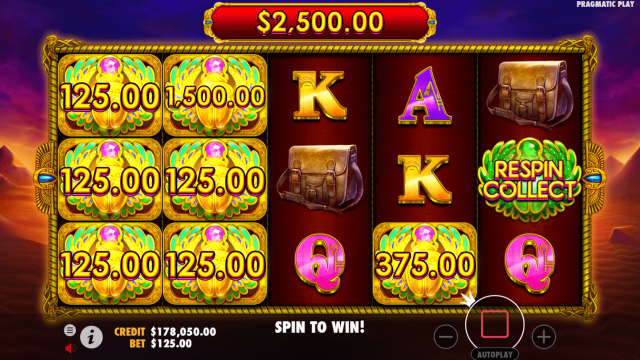 Jarttu84
John Hunter and the Tomb of the Scarab Queen
x900