Follow the map taking you to the lost treasure of Gems Bonanza™, the 8×8 videoslot where the colored markings form a path leading you to a Spin Feature with a Nuclear power, that can bring new symbols on the screen, or with Lucky Wilds that land in random positions. Trigger the Gold Fever feature that activates all spin modifiers and reach the last level to play with a fantastic 10x win multiplier!

The Aztec gods have just brought a brand-new hearth for their gems smithy to reward players with the biggest wins. The bellows are ready to furnish a blast of (winning) air, and the tuyeres have been setup. Everything is ready. The gems smithy can open its gates to its devoted players. 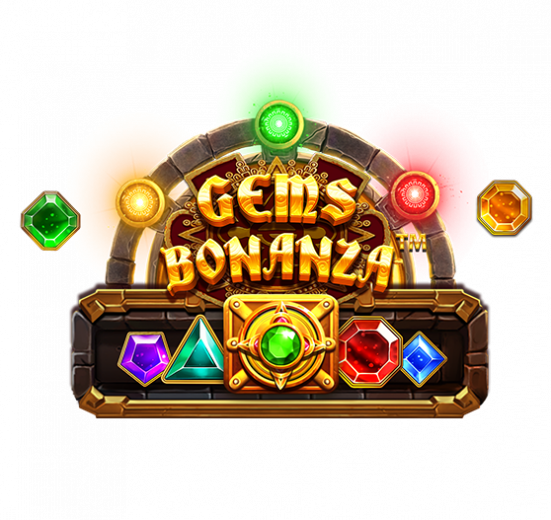 Welcome to the gems smithy, a magical place where gold ingots, glittery gems, and fantastic winning combinations can award a tremendous prize of up to 10,000x your bet. Start the fire that can melt incommensurable quantities of gold and get ready to see some of the biggest payouts in the industry. With a unique 8×8 grid and 20 paylines, this highly volatile slot lets you step inside of an Aztec temple where the God forge the most wanted prizes in the hearth fueled by precious, multi-colored gems.

Gems Bonanza is an online slot played on an 8×8 reel setup, with gems disappearing from the screen with a tumble, and with special cells featuring a specific mark that can trigger one of the five Spin Features. The game offers 20 paylines, an 96.55% RTP and a max win of up to 10,000x your stake that can really light up your day (and wallet).a

As the name hints, both high-paying and low-paying symbols landing on the reels represent precious gems. These symbols pay in blocks of minimum 5 of a kind connected both horizontally and vertically.

The Wild Symbol looks like a golden safe box that holds incredible treasures. This symbol can replace all others and is present on the reels only in the Wild Gem and Lucky Wild Features. It can also form different winning combos with different symbols.

This slot comes packed with features that can place giant 3×3 symbols on the reels or transform random symbols into wilds. The well-known tumble feature is also part of this slot, with symbols vanishing from the screen and being replaced by new ones coming from above.

After any spin, the symbols that formed winning combinations vanish from the screen, while the remaining ones fall at the bottom of the reels. The empty cells are filled with new symbols coming from above the reels.

The tumbles continue until there are no more winning combinations or until a spin Feature is activated as a result of a tumble.

In the base game, you will notice a few colored markings behind some symbols. When a win takes place on a marked cell, a specific Spin Feature is triggered. Thus, there are 5 labels and 5 Features available:

If the Aztec luck is on your side, you might activate multiple features at the same time. Shall this happens, they will play in the following order: Nuclear, Wild Gem, Squares, Colossal Symbols, and Lucky Wilds.

If the smithy is working at full capacity, the game will trigger this round. All winning symbols that exploded are counted, filling the Gold Fever meter from the lower right corner. When a certain number of symbols is reached, the game triggers the Gold Fever Progressive Feature.

You need to collect 114 points in the base game to activate this round. Thus, the feature starts after all tumbles and spin modifiers end.

The Gold Fever Progressive Feature starts at Level 1. At each level, all five spin features are guaranteed to be triggered one time with a starting multiplier of 2x. To progress to the next level, you need to collect more points until you reach the final level – level 5:

The feature ends when you did not gather enough points to advance to the next level or when you reach the fifth level.

If you want to play the Gold Fever Feature now, all you have to do is click on the Buy Gold Fever button from the left side of the screen. For 100x your bet, the game will trigger the feature where you can get to the next level by collecting points, just like in the base game:

Total bets range from €0.20 and €100, but the game offers you the chance to adjust your betting settings. You can pick up to 10 coins to use on each of those 20 fixed lines, and a denomination which will go as high as €0.50. Thus, the maximum amount per line is €5. To access the Betting Menu click on the (+) and (-) buttons near the Spin one.

The slot’s potential is pretty cool – a prize of up to 10,000x your bet can be won, if you hit the right features. Enter the Gold Fever feature and you will be able to reach it.

Modern technology and antique elements seem to go hand in hand in this online slot. A stone hearth depicting an Aztec symbol where gold is melted can be spotted on the right side of the screen, while a mysterious round fountain with a god’s face in the middle and five bullets of the same color as the markings is placed right near the reels. This is the Gold Fever meter we were talking about. Each time you hit a winning combo, the circle starts to fill with a golden liquid (maybe it is coming from the melted golden ingots).

When you land winning symbols on the marked cells, a flash of light crosses the screen and lights up the corresponding bullet, thus activating the feature. The Gems Bonanza slot brings a sparkle of Aztec magic into the slots industry.

The Gems Bonanza slot is an action-packed game that can bring the colossal treasure of up to 10,000x closer to you. Fill up the Gold Fever meter with glittering gems and collect as many points as possible to activate the Gold Fever Progressive Feature. Keep advancing through all five levels where a 10x multiplier awaits and do not stop until you reach level 5. If patience is not your strong point, buy the Gold Fever option by paying 100x your bet. 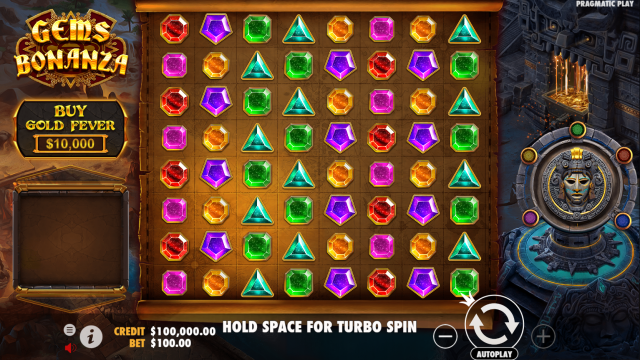 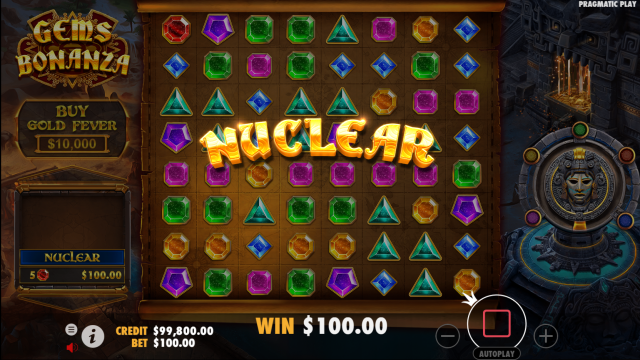 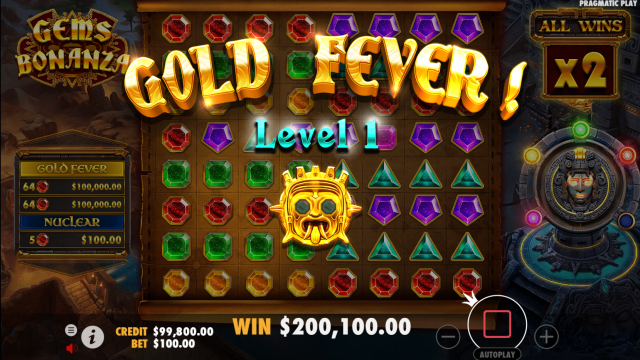 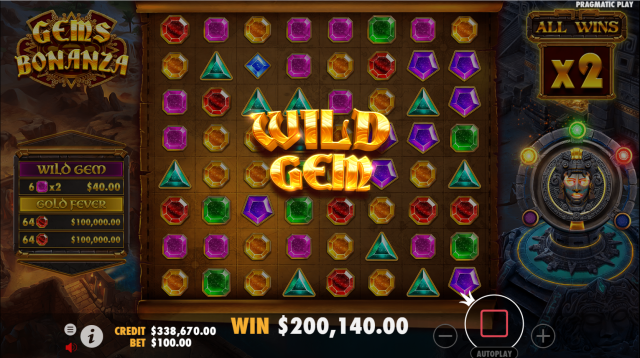 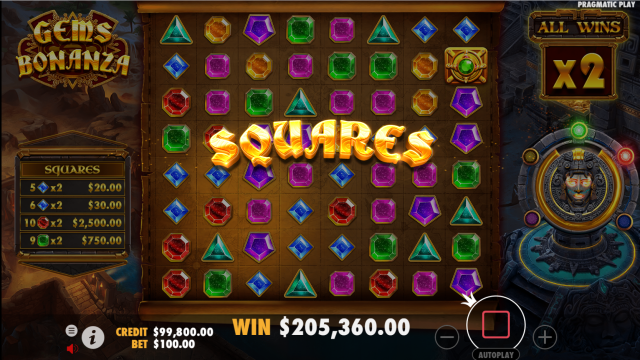 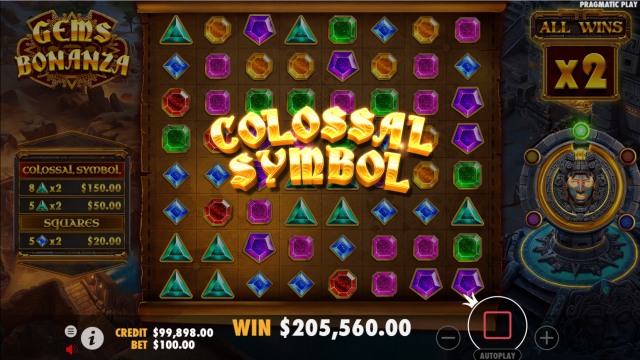 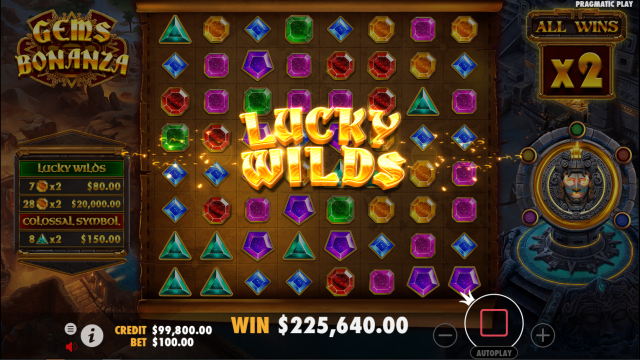 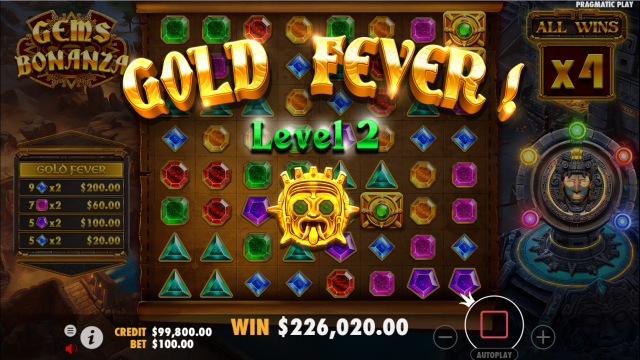 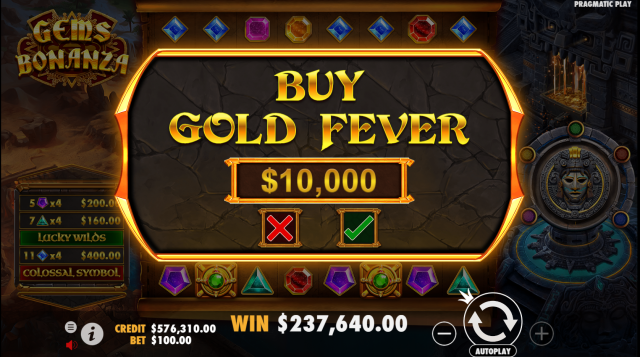 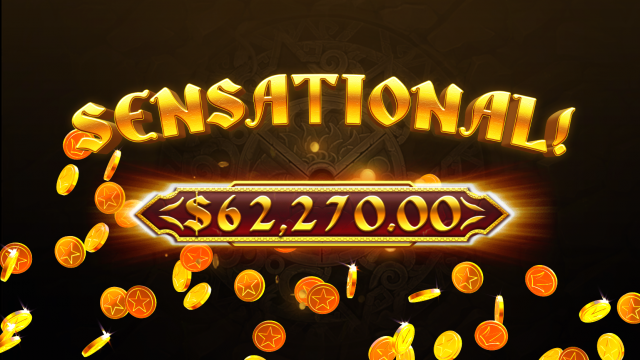 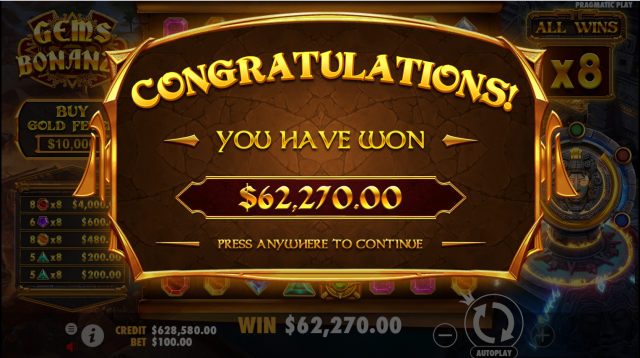