Find the treasure at the end of the rainbow in Emerald King Rainbow Road, the 5×3 videoslot with 20 paylines that features a bonus round with a progressive twist and an Eliminator bonus where the Scatter symbols can award money prizes. Take the Rainbow Road to huge wins and get ready for a thrilling adventure! 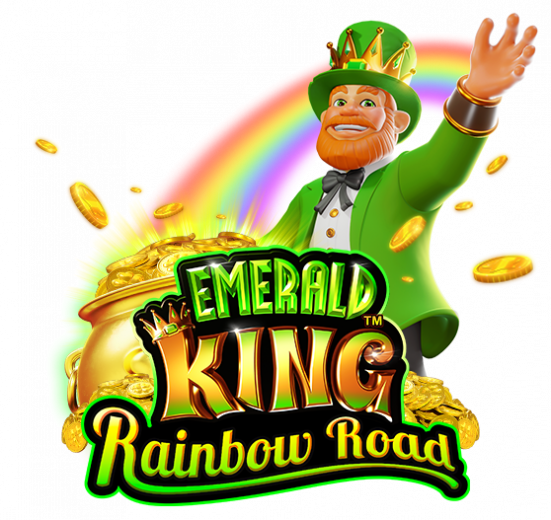 The friendly Irishman from Emerald King is back on another adventure in the Emerald lands. This time, our redheaded leprechaun invites you to take the rainbow road and collect as many points as you can on your way to the biggest prize. Trigger the Scatter Eliminator Bonus and pick golden pot symbols to eliminate them from the grid. The value of the remaining golden pot is awarded. What a quare game awaits!

The Emerald King Rainbow Road slot takes place on a 5×3 grid where the reels can randomly change their colors into green, thus triggering an exquisite bonus round. This online slot also features 20 paylines, a 96.71% RTP and a high volatility.

The paytable offers regular symbols that can pay up to 25x the bet and special ones that can unlock the special features.

A golden coin with a four-leaf clover and a green ribbon with the word WILD at the bottom acts as the Wild Symbol. It lands on all reels and can replace the other symbols.

To enter the magical Irish lands, you need to land one of the Scatter Symbols. Each Scatter triggers a different feature, providing a fun-packed game session. The first one is the Rainbow Road Scatter. It can hit anywhere on the reels, and if you manage to bring 3, 4, or 5 on the screen, the game triggers the bonus.

The Eliminator Scatter is the second Scatter. It depicts as a golden pot with a marvelous rainbow at the top. Just like the Rainbow Road Scatter, this symbol can land anywhere on the reels, triggering a bonus round.

The lucky 7s of different colors are the special symbols that can hit only during the Emerald King Mini Slots Bonus. These symbols land on the reels of the mini-slots and award money prizes as follows:

Make a stop at one of the three available features and get ready to win a tremendous prize of up to 20,000x the bet!

Hit 3, 4, or 5 Rainbow Road Scatters to activate this round. The game will take you to another screen with a winding road filled with 22 points. Each point can offer a specific money award or trigger the Emerald King Mini Slots Bonus. To advance on the map, you need to spin the reels of the mini-slot on the left side of the screen. The mini slot can award up to 6 points or the Collect symbol represented by a black diamond. When this symbol appears, the round ends, and the final amount is awarded to the player.

The Eliminator Scatter Symbol is the key to triggering this round. For 3, 4, or 5 on the screen, the game activates the feature where you need to pick Scatter Symbol to reveal a prize. However, this is not the usual pick-an-item kind of bonus. The symbols you pick are not awarded, like you might expect, but eliminated. Only the value of the last, unpicked Scatter Symbol is awarded.

Depending on the number of Scatter Symbols that activated the round you can win different prizes:

During this round, you can also trigger the Rainbow Road Feature.

This bonus can be triggered from the base game when all the reels turn green. Up to 5 mini slot machines can appear randomly in any cell, covering the rest of the reel with a bright rainbow. Now it’s up to the Lucky 7 Symbols to work their magic! Each slot machine spins and awards individually. Thus, when you win a prize, the reels continue spinning until the mini slot awards no more prizes. After all the slot machines have stopped spinning, the game gathers all the wins and awards the total amount to the player.

To enter the Emerald Lands, you need to place a minimum bet of €0.20. Place the maximum bet of €240 and get ready for an ionach adventure! These are not the only bets available. You can adjust your stake from the Betting Menu that can be accessed if you click on the (+) and (-) buttons from both sides of the ‘Spin’ one. The coin’s denomination can take any of the predefined values, while the number of coins per line can go as high as 10.

The treasure hidden in the Emerald Lands, guarded by the three features is worth 20,000x the bet. This amount can be reached in both the base game and during the bonus rounds.

The reels are set in the Emerald Lands, placed above the clouds. On both sides of the screen, you can see a magnificent rainbow while an Irish-inspired soundtrack fills your ears as you spin the reels. Trigger the Rainbow Road Feature or the Scatter Eliminator Bonus, and the lucky leprechaun will appear on the screen, encouraging you to pick a golden pot or to progress as much as possible on the highway to the Big Money award.

The Emerald King Rainbow Road slot takes you on a fantastic adventure above the clouds. Follow the Rainbow Road and play the bonus rounds that can bring an award of up to 20,000x the bet. Eliminate the symbols with low payout in the Scatter Eliminator Bonus and reach all 22 points in the Rainbow Road Feature to win a well-deserved award.

If you like Irish-themed slots, try Wild Wild Riches, an online game played on a unique 5×4 grid that can bring you direct money awards, multipliers, or one of the Jackpots during the Money Collect round.

Play Emerald King Rainbow Road for free on Social Tournaments, an online platform where you can enjoy slots tournaments with Pragmatic Play’s slots. 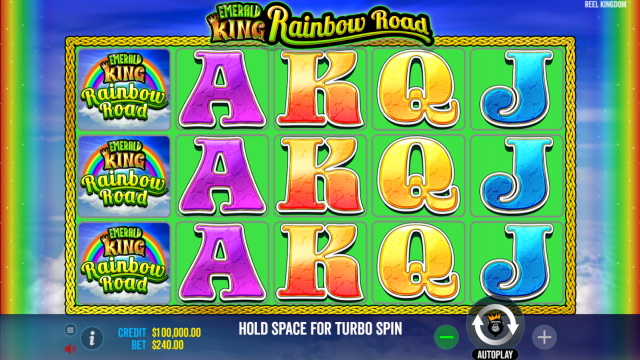 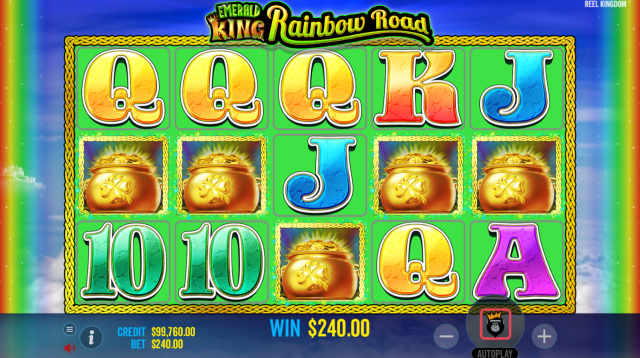 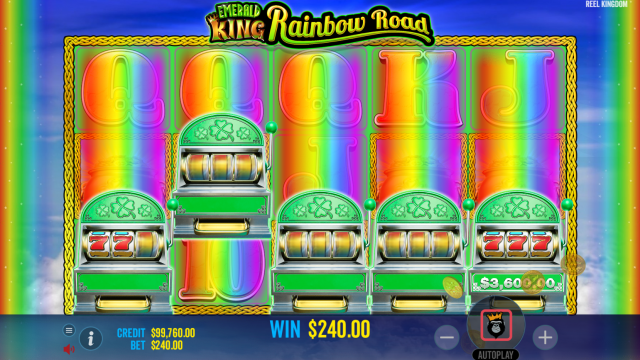 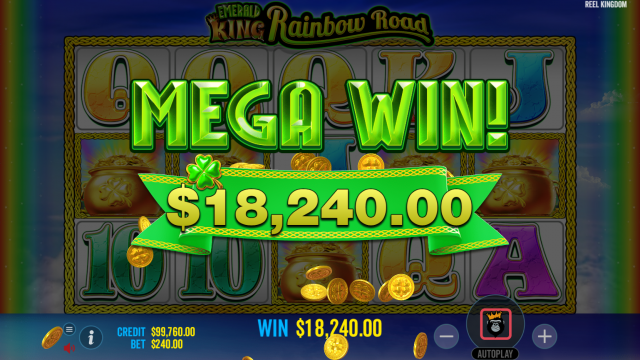 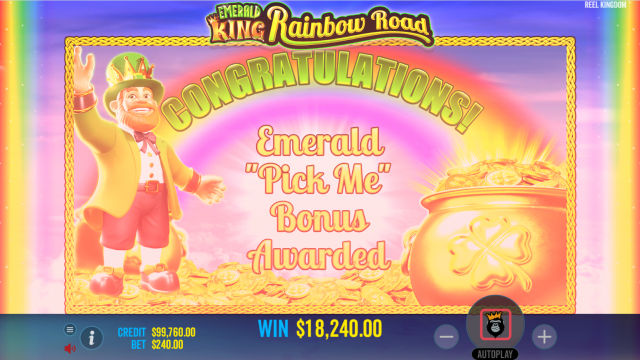 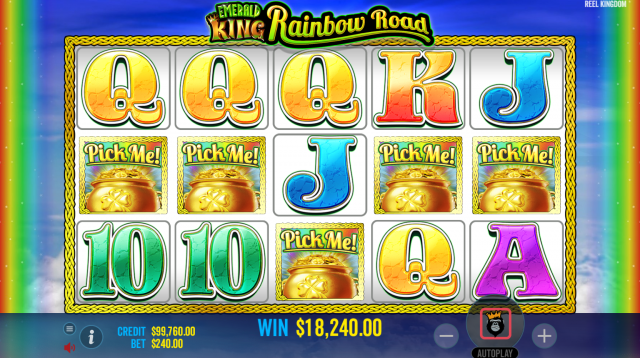 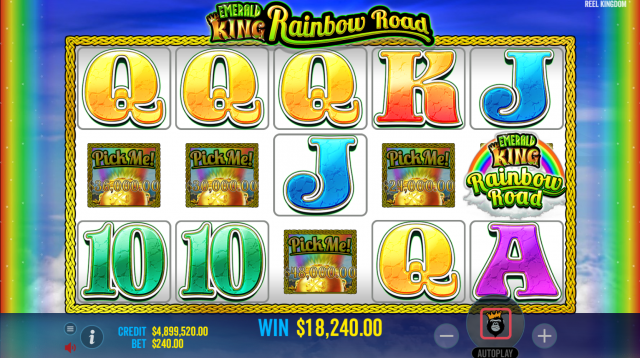 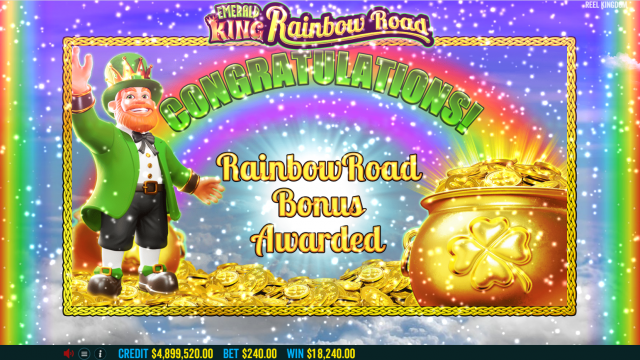 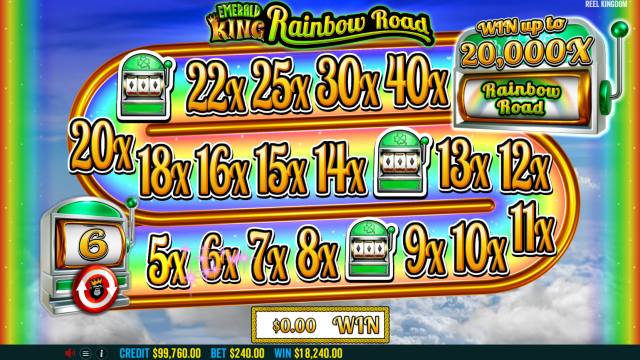 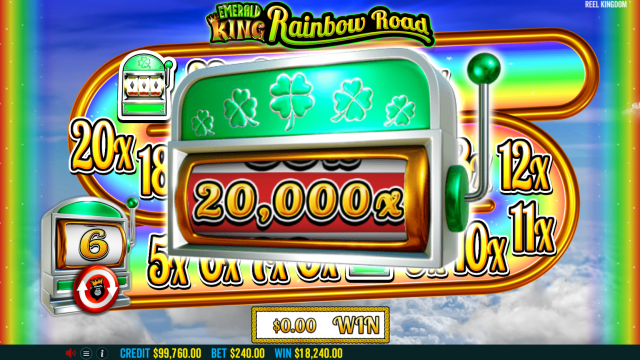 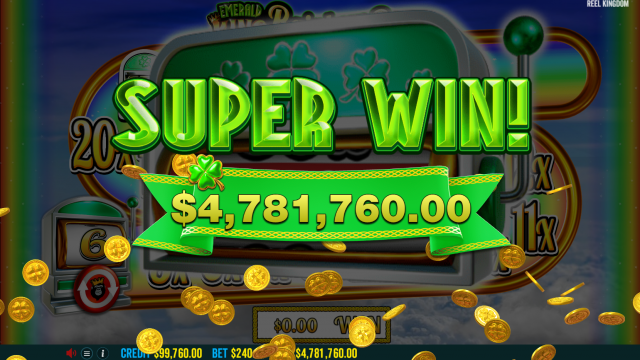