Help the two lovers get back together in Cash Elevator™, the 20-payline videoslot played across a 3×5 layout. The gameplay functions based on an elevator system, starting on the first floor and moving up and down through the 13 available stages. From the second floor onward, each level removes the lowest paying symbol from the grid, leaving only the high-paying ones on the screen. The two 1×3 Wilds representing the two lovers trigger the Dead Lovers Feature, where you can play up to 24 Free Spins, during which every win containing the lowest symbol of the current floor brings them one reel closer to each other. When the two sweethearts land on the middle reel simultaneously, the game awards more Free Games. Get to the 13th floor and activate the Hold and Spin round, where Money Symbols reset the Respins back to 4 every time they land.

Cash Elevator, a love story turned into a tragedy for the lovers but which set the grounds for a great videoslot for you! Exciting features, juicy wins on a creepy background – that’s what Cash Elevator is all about. Although it might seem similar to that love story written by Shakespear, we assure you ours is different. For example, the Cash Elevator slot takes place inside the lift of an abandoned (and creepy) hotel with 13 floors, whereas the story of Romeo and Juliette is set in Italy.

Get to the 13th floor and help the two lovebirds meet in the elevator to fulfil their undying love. While you are there, you can also check out the Hold and Spin Feature, which is common in Reel Kingdom’s titles.

The Cash Elevator slot might look like a regular online slot at first, but don’t let the traditional, 3×5 format fool you. With 20 paylines, a high volatility, and a 96.64% RTP, this videoslot works based on an elevator system that can take you from the basement to the 12th floor in a blink of an eye.

The standard symbols can land juicy prizes of up to 50x the stake if you hit five of a kind on a payline. The game also features special symbols that have a massive impact on the game’s progress.

There are two Wild Symbols hitting the reels during the gameplay. One is the bellhop, while the other, his lover, the mysterious lady. The elevator boy wears white gloves and a square hat, while his lover, the mysterious lady, wears a front-short, long-back kind of dress. The two characters hit only during the Dead Lovers round and can replace all the other ones, except for the UP and DOWN arrows and the Money Symbols.

The UP and DOWN arrows land on the middle reel and can influence where the elevator goes. These symbols hit with a number on them, from 1 to 12, displaying how many floors the lift will jump.

There are also three types of Money Symbols, each with a specific award.

Before explaining how this feature works, you must know that the entire gameplay is based on an elevator mechanism. Thus, there are 13 floors (and a basement) available for you to get out at, each with its own surprise.

The game starts at level 1, with all symbols present on the reels. Starting from the second floor, the lowest-paying symbols are removed progressively, as follows:

The Cash Elevator can move up and down with the help of the UP and DOWN symbols, which display how many floors the elevator can jump. However, the lift can also go up if you form a winning combo with the lowest-paying symbols from that level. The UP arrow can take you up 1, 2, 3, or 12 floors, while the DOWN arrow can go down 1, 2, or 3 levels.

To activate this round, you need to land a full 1×3 Wild Symbol on reels 2 or 4. Before the Free Games start, you need to pick one out of three crows in order to decide the number of Free Spins to play. If the round is triggered with one Wild Symbol, you can get up to 12 Free Games. However, if the bonus round is activated with two Wild Symbols on the reels, the game can offer up to 24 Free Spins.

The elevator randomly chooses a floor to stop at, and the round starts.

The two lovers are placed on the first and the last reels. Depending on what lands during the Free Spins bonus, the two can either get closer or remain separated for an eternity (or until you hit the right combination). This way, the two Wild Symbols move one reel towards each other each time you land a winning combo with the lowest-paying symbols. If the two lovebirds land on the middle reel, the game awards 5 extra Free Games, showing you that true love always wins.

This is the peak of the Free Spins round. If you land more winning combinations with the lowest-value symbols, the two lovers will move back to their initial places, on the first and last reels. Then, they start moving towards each other again if you hit more wins. It is like a sweet dance that can separate or unite the two characters.

The Hold and Spin Feature

Reaching the 13th floor will activate this round. Before the feature starts, the game requires you to choose one out of three options to decide how many Money Symbols triggered the round. You can get from 3 to 11 Money Symbol distributed randomly on the reels. The elevator moves to a randomly chosen floor, and the Respins begin.

The feature starts with 4 Respins, and each time a Money Symbol hits, the game resets the count back to 4. The Money Symbols award money prizes and multipliers or bring the elevator to a certain level.

The silver and gold Money Symbols come with a predefined money value, while the X Money Symbol adds a multiplier of 2x, 3x, 5x, or 10x to the total win of the round. The last Money Symbol displays a floor, taking you to the said level.

The round ends when there are no more respins or when you filled all cells with Money Symbols. The game pays out the total amount, and the elevator moves to a random level after the ending screen.

If you land enough DOWN arrows, the lift will go below the first floor, straight to the basement. Once you get there, the game propels the elevator to a random floor up to the 12th one.

Usually, one does not have to pay to get into an elevator, but in this case, you need to place a bet of at least €0.20  to get the reels moving. You can adjust your bet from the Betting Menu, which can be accessed by clicking on the (+) and (-) buttons near the ‘Spin’ one. Here, you can select the number of coins per line and the coin’s denomination. The number of coins per line ranges from 1 to 10, while the coin’s value can go as high as €0.50.

The maximum prize you can find in the haunted hotel is worth 20,000x the stake. You can reach it during any of the available features, but keep in mind that, if it happens, the game will pay out while the round ends immediately. This means you will lose all the remaining Free Spins.

The Cash Elevator slot falls into the Steampunk category, along with The Amazing Money Machine, another feature-filled online slot in our offer. You can see the gears and a part of the mechanism of the elevator on top of the reels, while a massive staircase can be spotted behind the grid.

The entire videoslot has a shabby vibe, which goes perfectly with the heavy soundtrack and the two characters who seem out of a zombie movie.

Cash Elevator, the latest Reel Kingdom title powered by Pragmatic Play, brings the Steampunk vibe on your screen through a gameplay packed with Free Spins and Money Respins. Even the base game can offer nice wins as the elevator moves to the highest floors, where you will be playing with high-paying symbols on the reels.

The Money Respins round comes with multipliers and money prizes, which we are sure you will love, while the Free Spins bonus round is played with two stacked Wild Symbols. Help the two lovers meet in the middle of the screen, and you will be rewarded with juicy prizes! 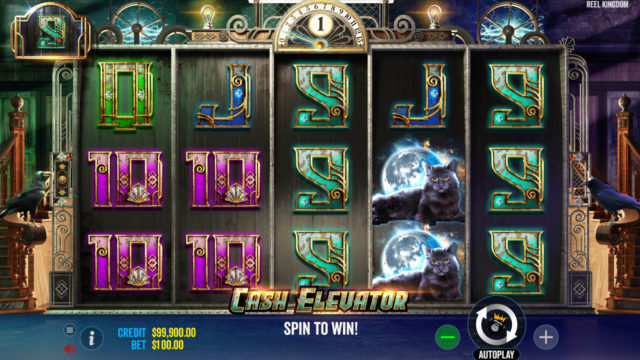 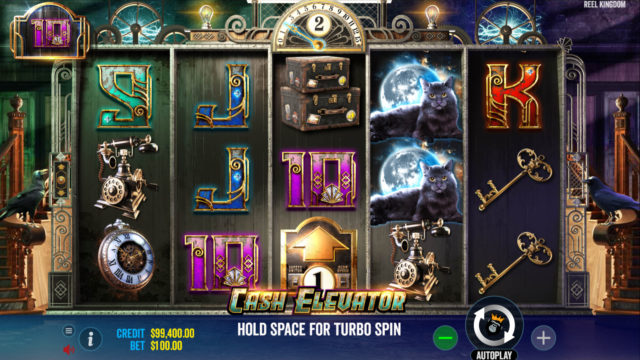 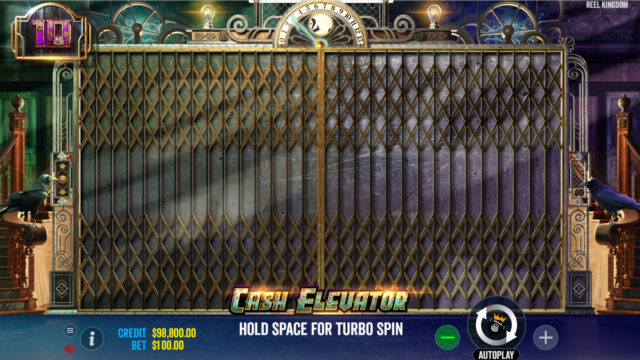 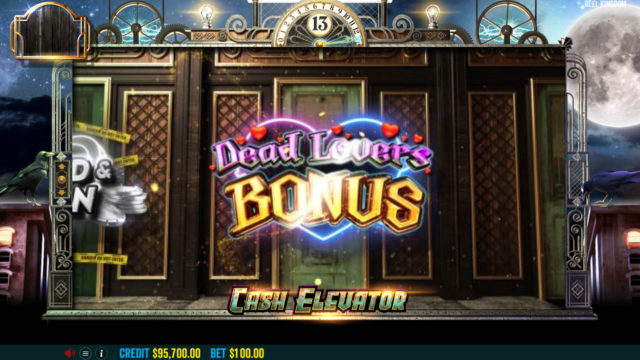 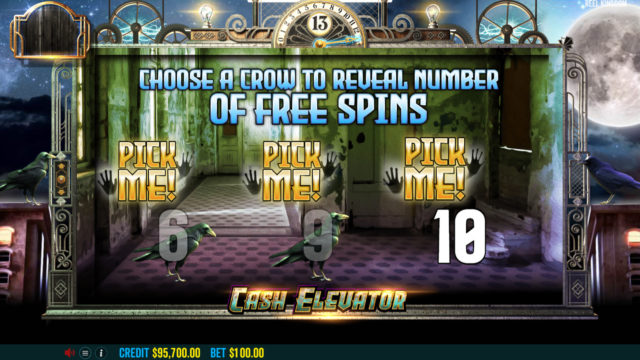 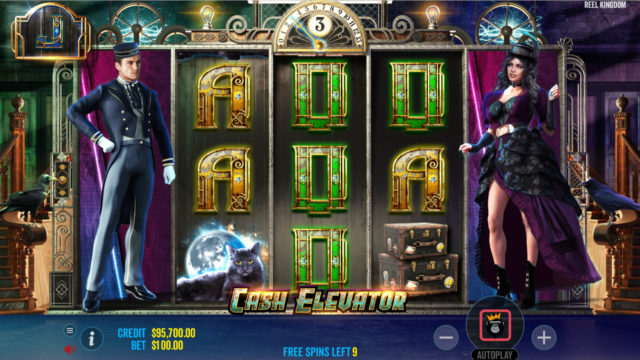 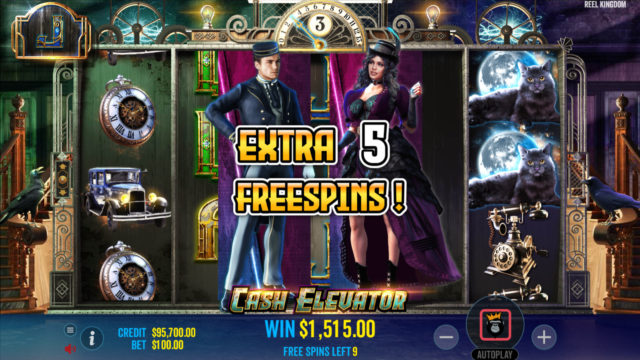 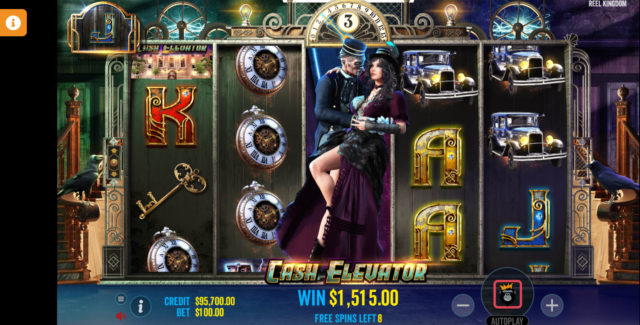 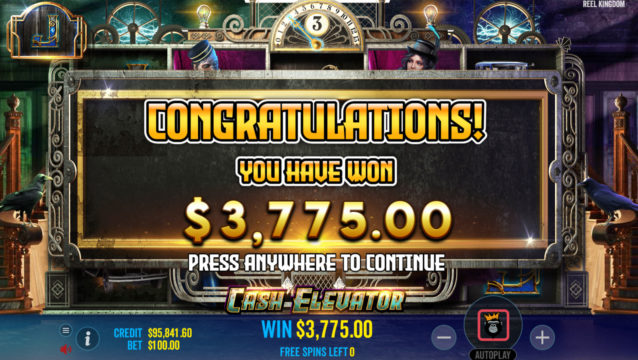 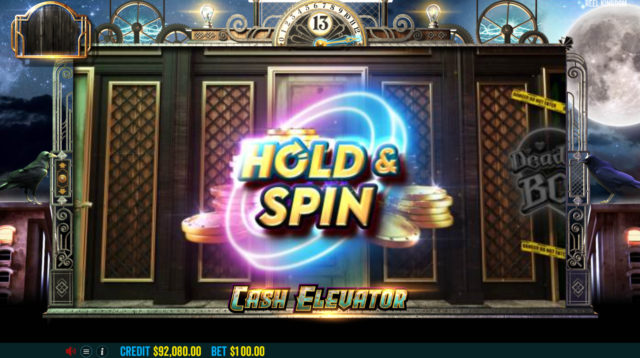 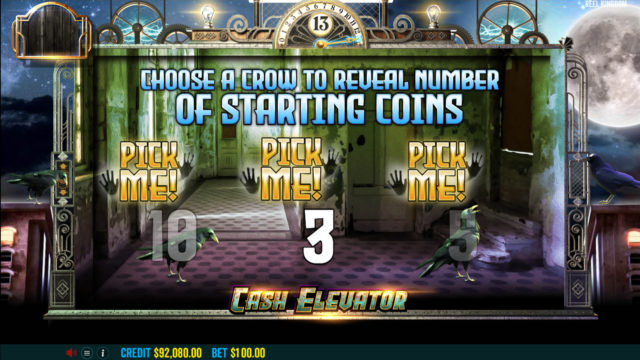 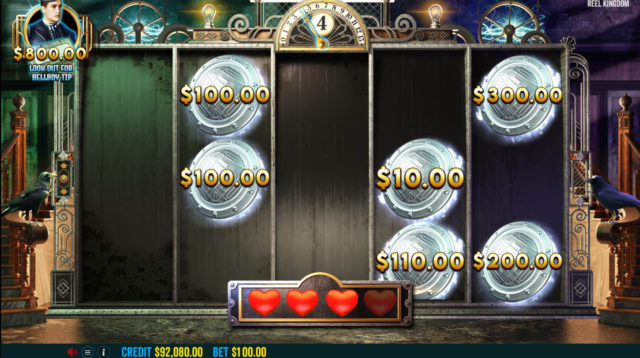