Unknown treasures await in Book of Kingdoms™, the 5×3 videoslot with 25 paylines that takes you to the heart of a mystical place where the Book of Kingdoms Symbol can change your destiny. The Silver Coin can hit with the value of the Mega Jackpot of up to 1000x your bet or it can trigger the Money Respin Feature where the values of all Money Symbols are added and paid out.

The mysterious Egypt holds many ancient secrets of long-forgotten civilizations. The Book of Kingdoms is the only one that can help you find the treasure of up to 20,000x your bet. Find it on the reels of this 25-paylines online slot and get your hands on the max prize fit for a king! 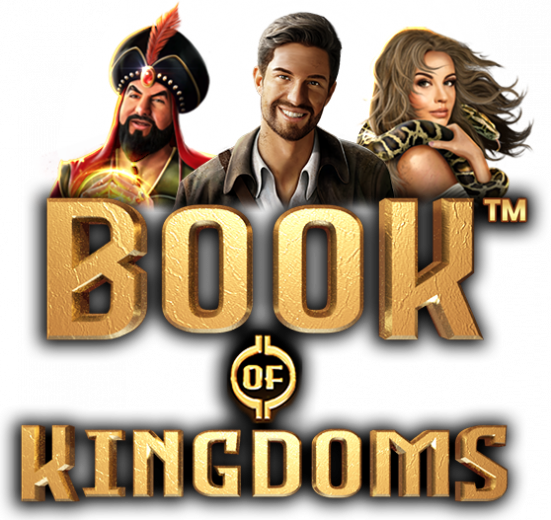 Play this engaging videoslot and help the brave explorer find the enigmatic Book of Kingdoms that can unlock huge wins. The team accompanying you in your quest consists of a sultan, a fez-wearing monkey, and a snake lady. They can not only help you overcome some of the obstacles but can also award up to 20x your bet. Let the oriental adventure begin!

The Book of Kingdoms slot is played on a classic 3×5 reel setup, that features 25 paylines, a medium volatility, and a 96.69% RTP. The symbols hitting the reels are both high-paying, such as the sultan or the snake lady, and low-paying, the Ace and King card being just two examples.

As the name hints, the Book of Kingdoms symbol is the most lucrative one. It acts as both Wild and Bonus and it pays 20x your total bet if you land 4 on a payline, or 1x your stake if you bring 3 on the screen. As a Wild Symbol, the Book of Kingdoms can replace all other symbols, except for the Silver Coin and the Bonus symbols. The Book of Kingdoms as a Bonus Symbol can trigger the Free Spins feature. We are starting to believe that this book might hold the secrets of all kingdoms.

The Silver Coin is another symbol you will want to see landing on the reels. It can appear anywhere on the screen and it can carry either a random value from a predefined set or the Mega, Major, or Minor Jackpot of 1000x, 100x, or 30x your bet. This shiny symbol is also the key to triggering the Money Respin round.

The Book of Kingdoms slot offers two engaging features that are meant to boost your winnings in no time. On one hand, we have the Money Respin Feature that can award one of the three jackpots and on the other hand, we have the Free Spins round that comes packed with an expanding symbol.

Trigger this feature by landing at least 5 Silver Coin Symbols on the screen. The round starts after the game pays out all the winning combinations on the screen, leaving only the Money Symbols that triggered the round. Thus, during this feature, you will see no sultans or monkeys hitting the reels. The screen will be filled only with shiny silver coins.

The Money Respin Feature starts with three respins, with every Silver Coin Symbol that hits resetting the number of respins back to 3. Moreover, all Money Symbols that land stay on the screen until the end of the round. You will play this feature until there are no more respins left or until the screen is covered in Silver Coin Symbols.

At the end of the round, the game adds the values of all Money Symbols present on the screen and pays out.

You need to land at least 3 Bonus Symbols to activate this round. Before the feature starts, the game selects a special symbol that will expand during the next 5 Free Spins awarded. All symbols can become an expanding symbol, but the Bonus and the Money ones.

During the Free Spins, the expanding symbol will cover the entire reel, giving you the opportunity to form new winning combinations. The expanding symbols pay according to the paytable even on non-adjacent positions. Keep in mind that for the symbols to expand, there need to be enough symbols to form a win on the grid.

The Book of Kingdoms slot also offers a retrigger option. Hit three or more Bonus Symbols on the reels during the Free Spins round and the game awards five new Free Spins that will be played with the currently selected expanding symbol. The game also lets you retrigger this feature as many times as you like.

You can join our adventurer and travel to Ancient Egypt with both €0.25 and €250 in your pocket, the game giving you the chance to edit your betting setting anytime you want. Click on the (+) or (-) button near the ‘Spin’ one and the betting menu will pop up. From here you can set the coins per line from 1 to 10 and the coin’s denomination between €0.01 and €1. Another essential aspect to remember is that the player has to place a bet on all 25 active paylines.

Keep in mind that the treasure you are after is worth 20,000x your bet. Eyes on the prize, player!

The stone framed reels are set on a superb background with dunes and a Mayan temple being visible on both sides of the screen. Huge palm trees surround the grid as if it must stay hidden from the curious eye. You can tell from the very first screen that this no ordinary Egyptian landscape.

The soundtrack features ottoman accents, giving the entire slot a strong oriental vibe. Land a winning combo and a familiar sound that can be heard when playing real slot machines highlights you win.

The Book of Kingdoms slot is the latest game created with Reel Kingdom and, just like the other slots designed by the studio, this game provides an engaging online slot experience and colossal wins. The Free Spins Feature brings an expanding symbol on the screen, allowing players to form more winning combinations, while the Money Respin round can award a tremendous win of up to 1000x your bet (the Mega Jackpot).

Play Book of Kingdoms for free on Social Tournaments! Join the slot tournaments and win real money prizes for free. Check their schedule and make sure you don’t miss the Special Tournaments that feature this thrilling videoslot! 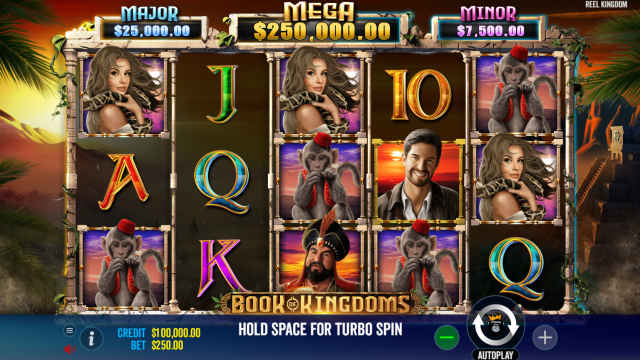 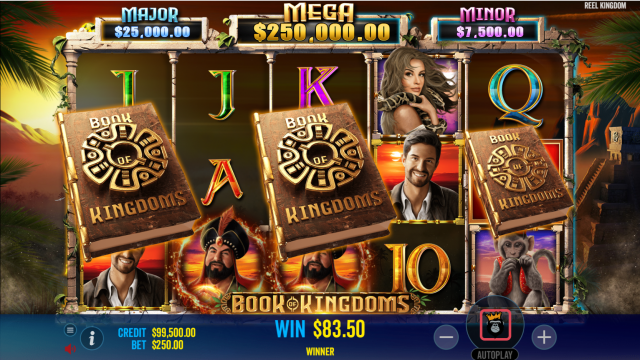 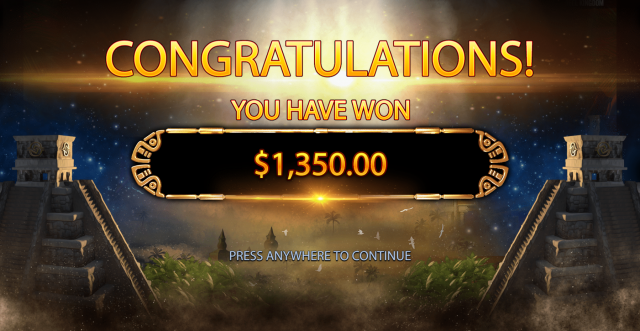 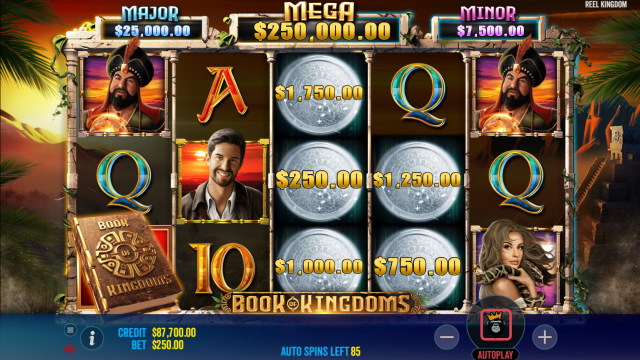 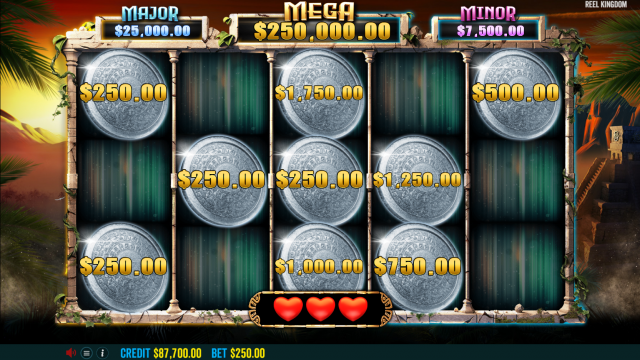 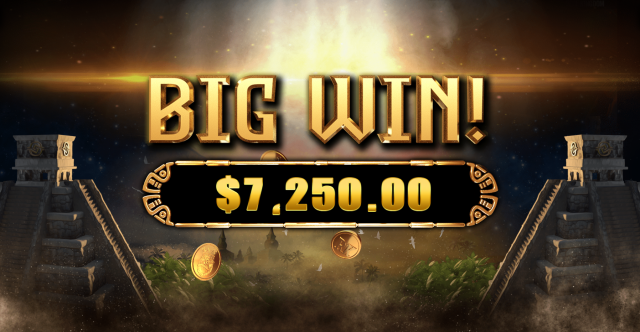