Aladdin and The Sorcerer

Enter the magical world of Aladdin and the Sorcerer, the 5×3, 20 lines video slot. Be on the lookout for the two powerful wizards that add random WILD symbols the reels and when they meet, their spells clash and start the unlimited free spins round with random and sticky WILDs of up to 3x multiplier.

Make yourself comfortable and let’s journey to a land of caravans and rugs, flying or otherwise, to check out the new game from Pragmatic Play, Aladdin and The Sorcerer.

Grab a cup of tea or Arabic coffee, jump on the magic carpet and let’s take a look at the newest game from Pragmatic Play, Aladdin and The Sorcerer (perhaps Jaffar, perhaps a different Vizier, perhaps not even a Vizier). The game is based on the famous Arabic story, made popular by Walt Disney’s adaptation. The action takes place in a world of wonder and adventure, where the chance to get into an epic battle with evil Sorcerers lurks behind every corner.

Aladdin and the Sorcerer is a highly volatile videoslot played on a mesmerizing backdrop that depicts the entrance in a cave – the Cave of Wonders, perhaps. The top payout is worth 6,532.5x your bet, but beware: only those whose worth lies far within can find this treasure. Play this online slot for free and find out if you are the chosen one!

Aladdin and The Sorcerer has 5 reels and 20 paylines that can bring you some big wins. Thanks to the Respin feature with 2 parts, you can win up to 6,532.5 times your initial stake.

This slot has a high volatility and a return to player value of 96.23% – which is above the average value in online slots.

There are 13 symbols in this game that look like precious gems – 13 “diamonds in the rough”, if you will. Among the most valuable are the gems with a golden trim that can award 3.75, 10 or even 50 times your total stake, if you land 3, 4 or 5 in one combination. If, however, you land 5 of the gems that don’t have the gold trim, you can win 2x to 6.25x your bet for each 5 of a kind. Here’s a quick rundown of how much these treasures pay:

The Wild symbol looks like a small, green piece of jade, with a golden frame and the word WILD in the middle. It pays 50x for 5 on a payline, can replace any other symbol (except for Aladdin and the Sorcerer – they are irreplaceable) and can normally appear on reels 2, 3 and 4. Pretty Wild, huh?

The most interesting “symbols” are, by far, Aladdin and The Sorcerer. Just like in an ancient boxing ring, the Aladdin symbol can only appear on reel 1 and The Sorcerer symbol on reel 5. These two function as Wild and Bonus at the same time – they can substitute any other symbol and can trigger the Respin feature.

The keys to unlock big wins are, of course, Aladdin and The Sorcerer. If they show up on reels 1 and 5 the game triggers different scenarios. There are 3 situations that you can encounter:

The Respin Round – Part 1

This feature starts with Aladdin firing red flames from his lamp and The Sorcerer attacking with blue sparkles from his globe. Reels 1 and 5 become stacked with Wilds and 2 health-bars appear at the top of the screen, above each character and the music picks up. This is how you know that stuff got serious.

This battle can go in one of two ways:

If good-guy-Aladdin wins the fight, the crowd goes crazy and Part 2 of the respin feature is unlocked. If, however, evil-dude-Sorcerer wins, the respin round ends. BOOOOOOO!

The Respin Round – Part 2

This feature is about you and Aladdin celebrating victory – you get 3 extra spins, all Wilds symbols stick on the screen and, with each spin, the multiplier increases by 1. Thus, on the first respin all Wilds will have a 1x multiplier and on respins 2 and 3 there will be a 2x and 3x multiplier. Land more than 1 wild in the same winning payline and the multipliers are added together.

The feature ends when all 3 respins have been played out.

Bets can range between €0.20 and €100, so there’s something here for every budget. If Respin Round – Part 2 brings you enough 3x multipliers, we’re talking about winning 6,532.5x your initial stake. Prize fit for a prince/princess, no?

When the game starts, Aladdin is merrily floating on the left side of the screen, smugly holding his precious lamp and giving The Sorcerer the stare-down of the century. In the right corner, The Sorcerer is getting ready to attack Aladdin with his blue magical orb. He looks mean and menacing, the kind of sorcerer you wouldn’t want to bump into late at night.

The music is actually one of the strongest suits of Aladdin and the Sorcerer. Orchestral, grand-sweeping music with some obvious Arabian influences really put you into the mood for adventure, slots, and fighting. The music really picks-up during the respin round, with stronger percussion, some crowd-chanting “HEY” and a higher tempo – fit for an action-adventure movie, nice to listen to, gets the blood pumping.

The Aladdin and The Sorcerer online slot is all about the battle between the two characters and triggering the Respin feature. In (almost) any story, it is the hero that wins the big fight and saves the day, sometimes some royalty of the opposite gender. In this case, it’s Aladdin the one who must win and bring you to the second part of the Respin feature. If he wins, you win. If he loses, you also win, just a bit less. Cool!

Our magical ride ends here, but you can go ahead and try the real deal! Aladdin and The Sorcerer is now available on Pragmatic Play’s partnered casinos, so go try it out. We’re certain you won’t be disappointed.

If you enjoyed this oriental slot that takes us to Sheherazada’s tales you will probably love a video slot with a low volatility and 50 paylines that can bring you winnings of up to 745 times your bet. 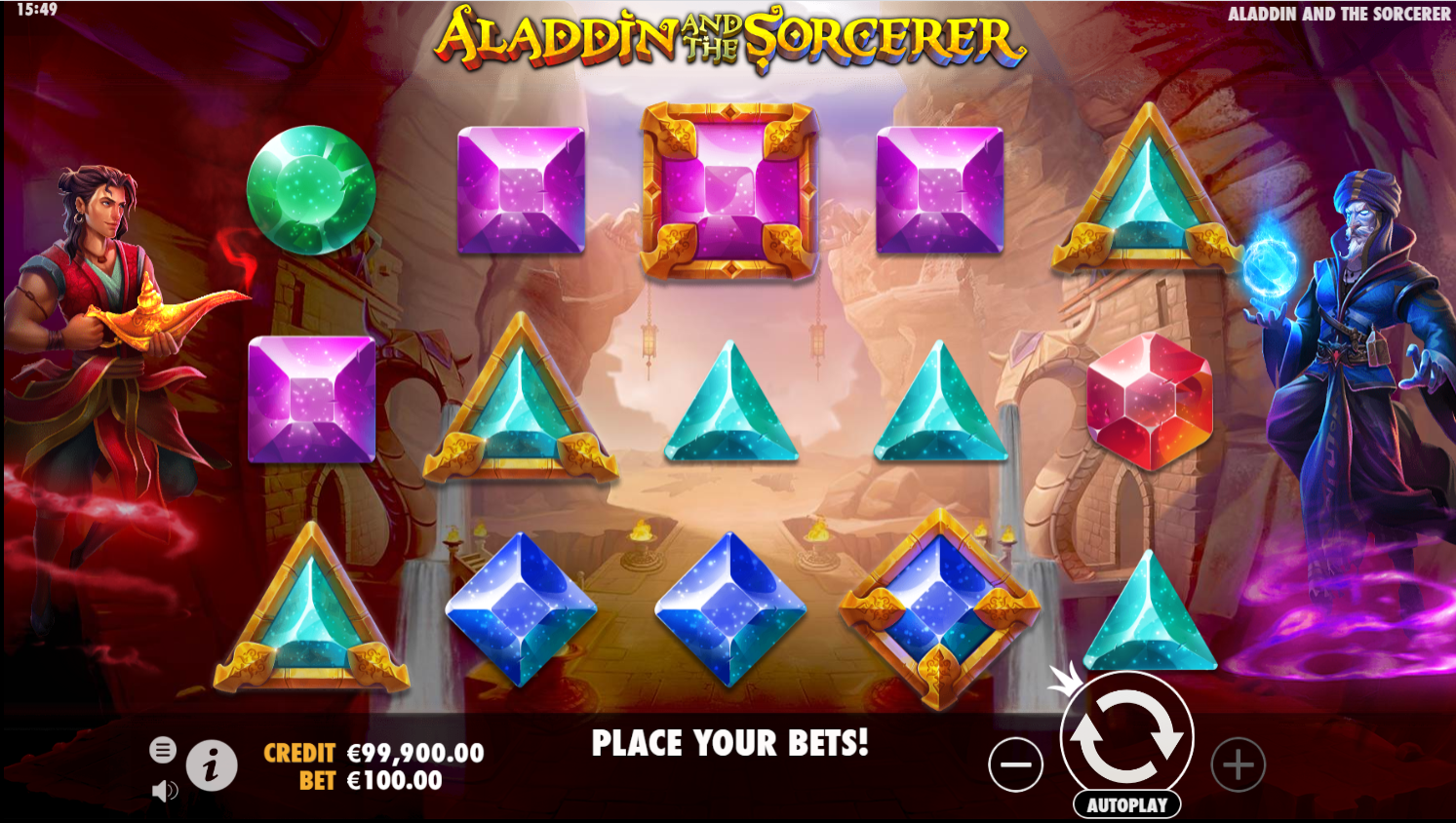 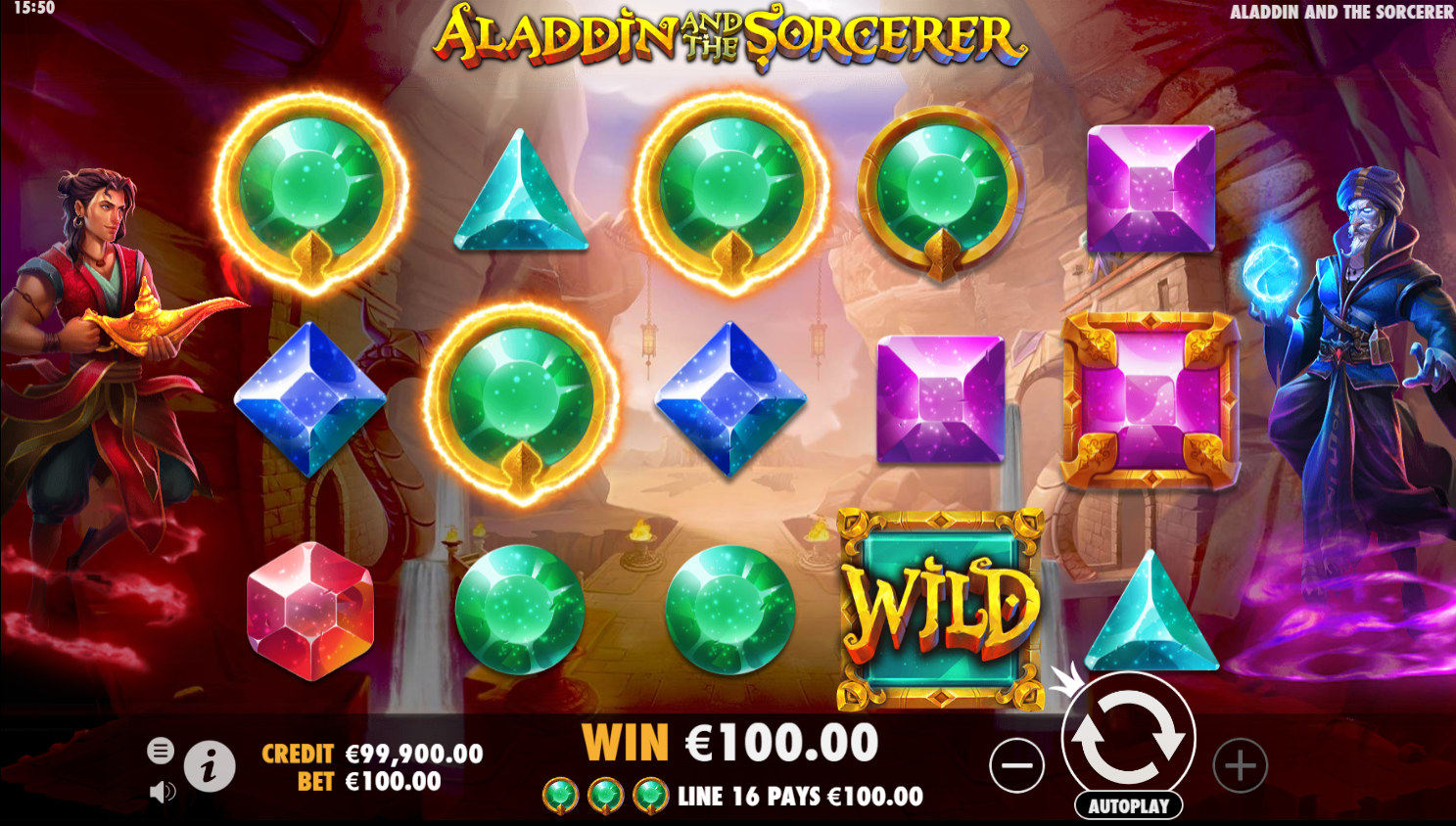 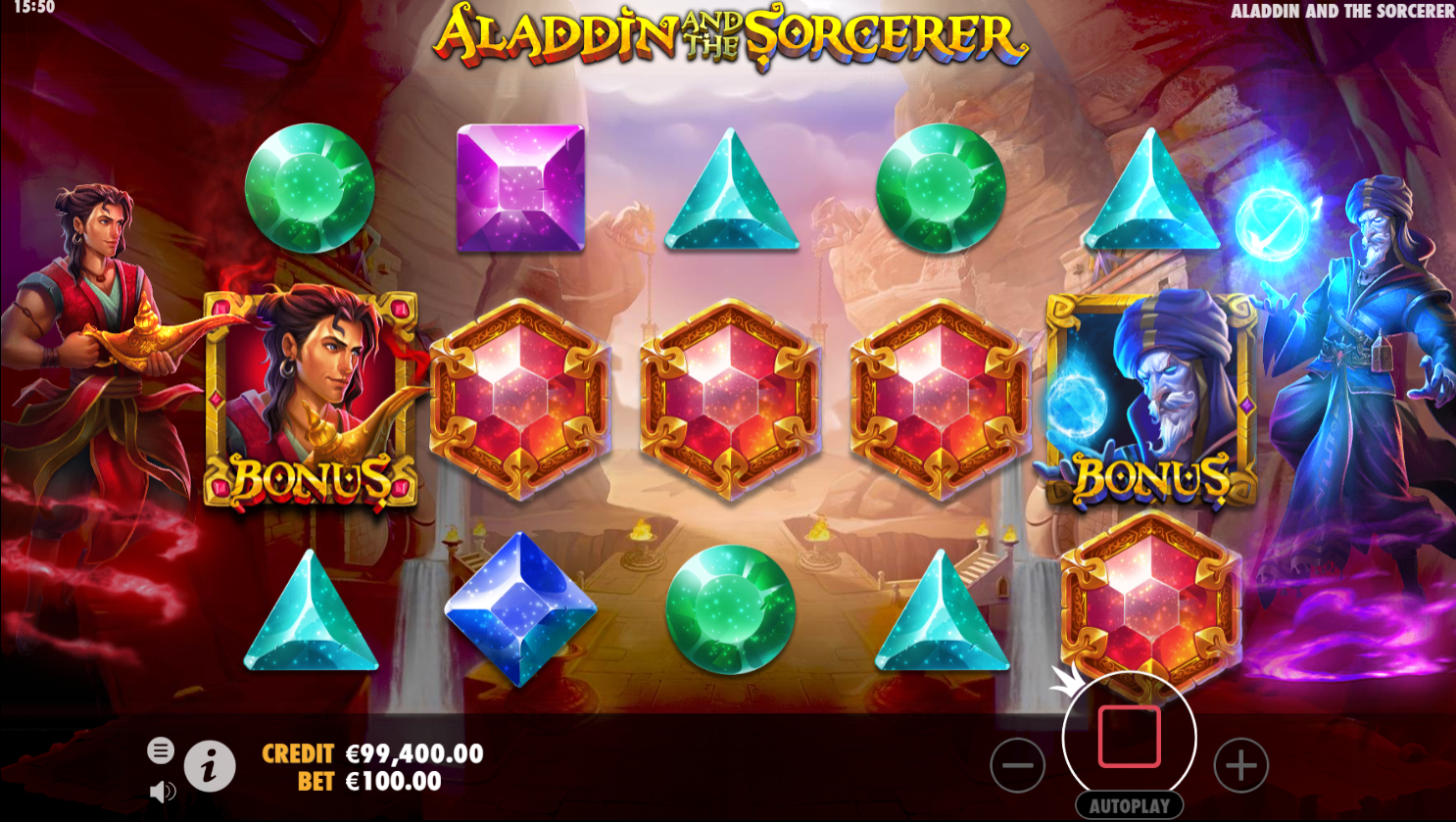 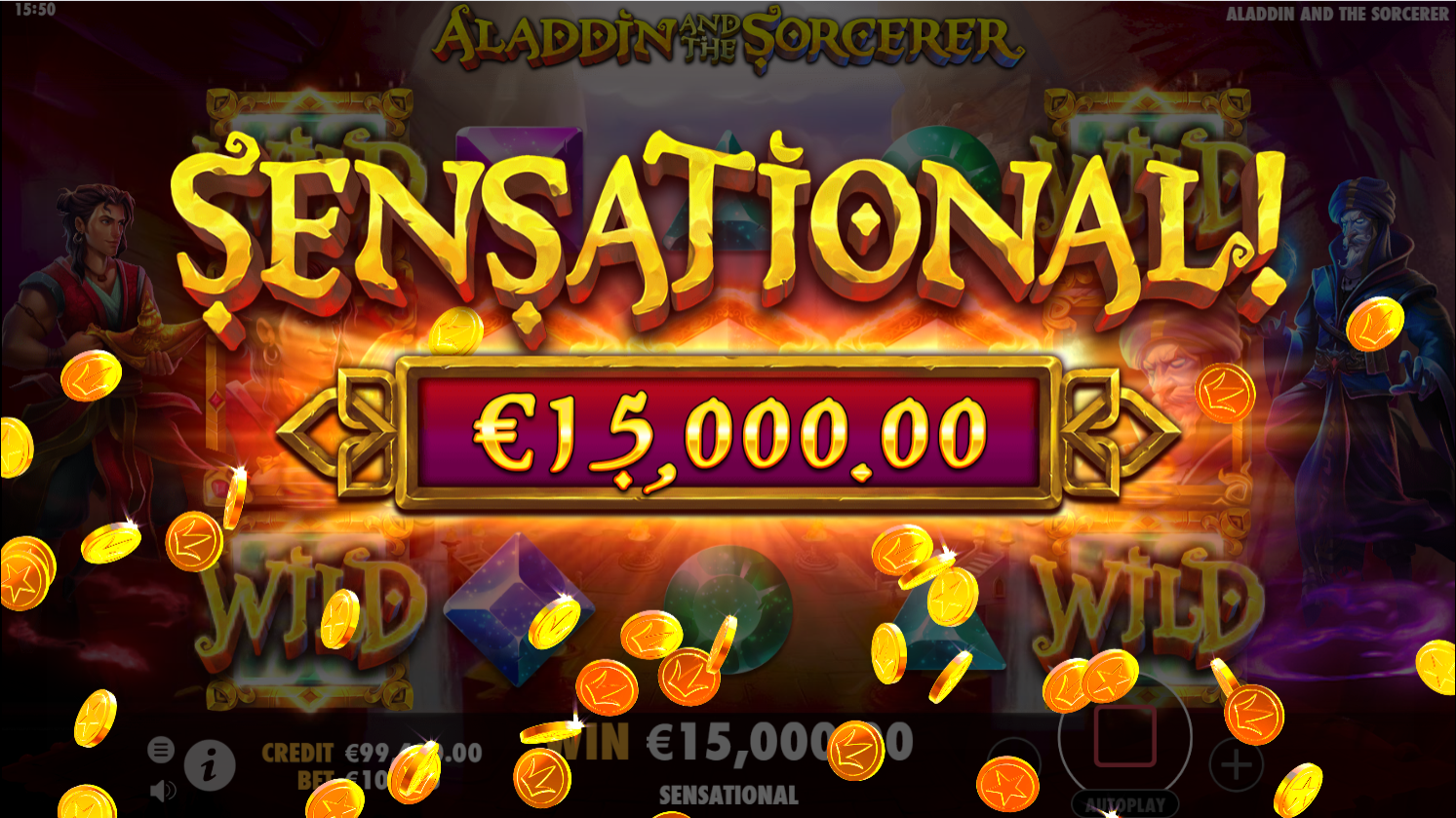 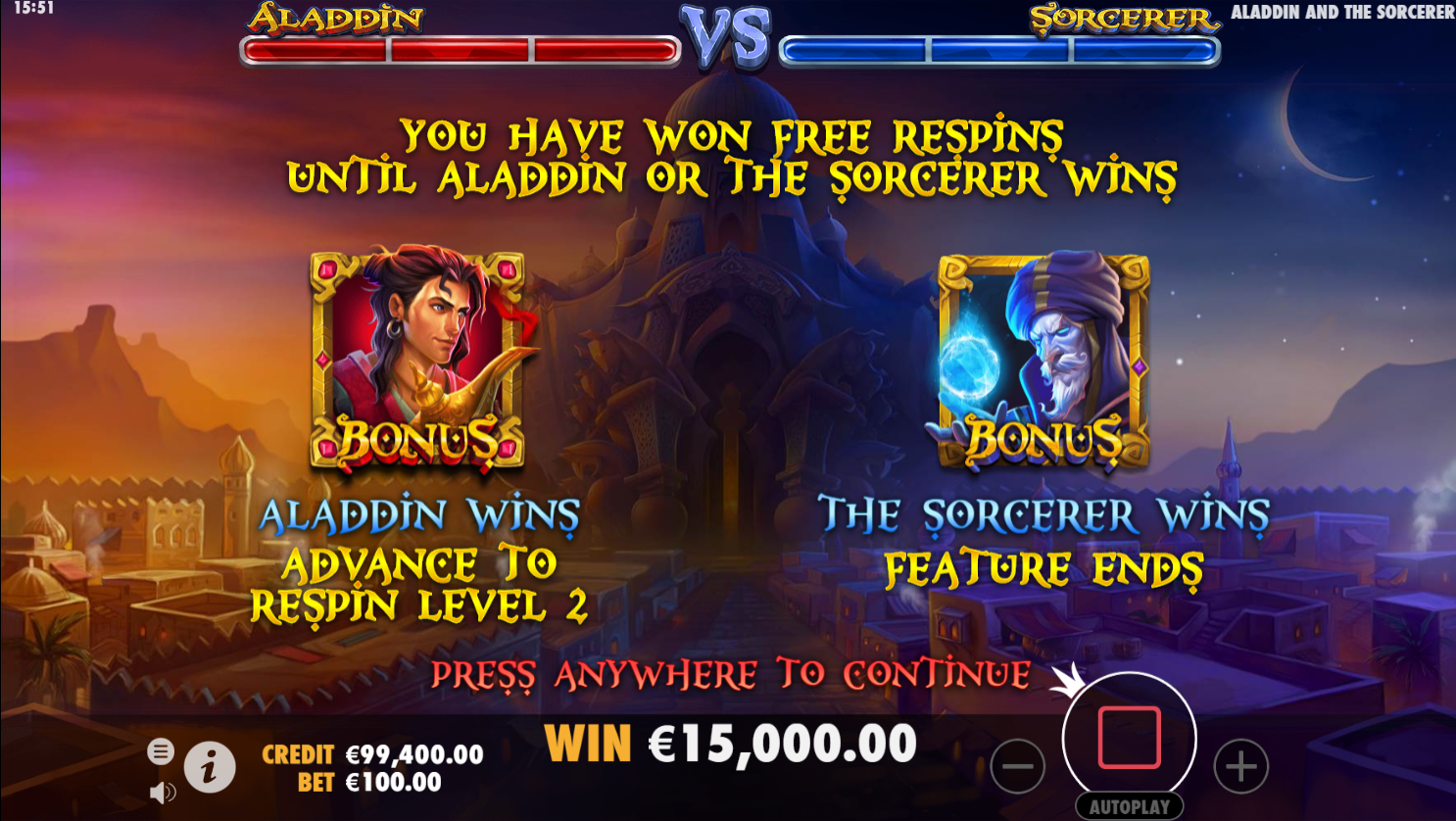 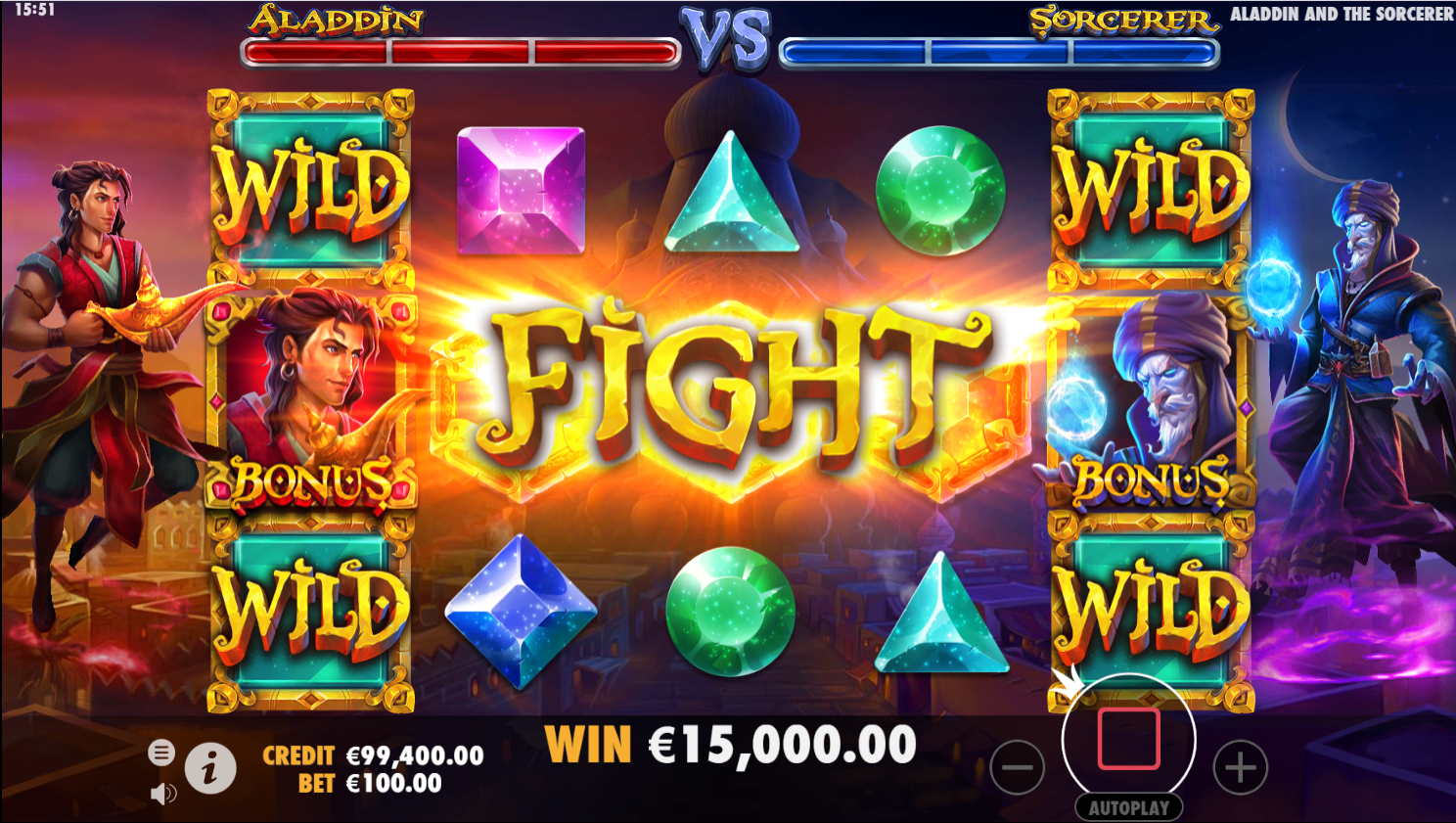 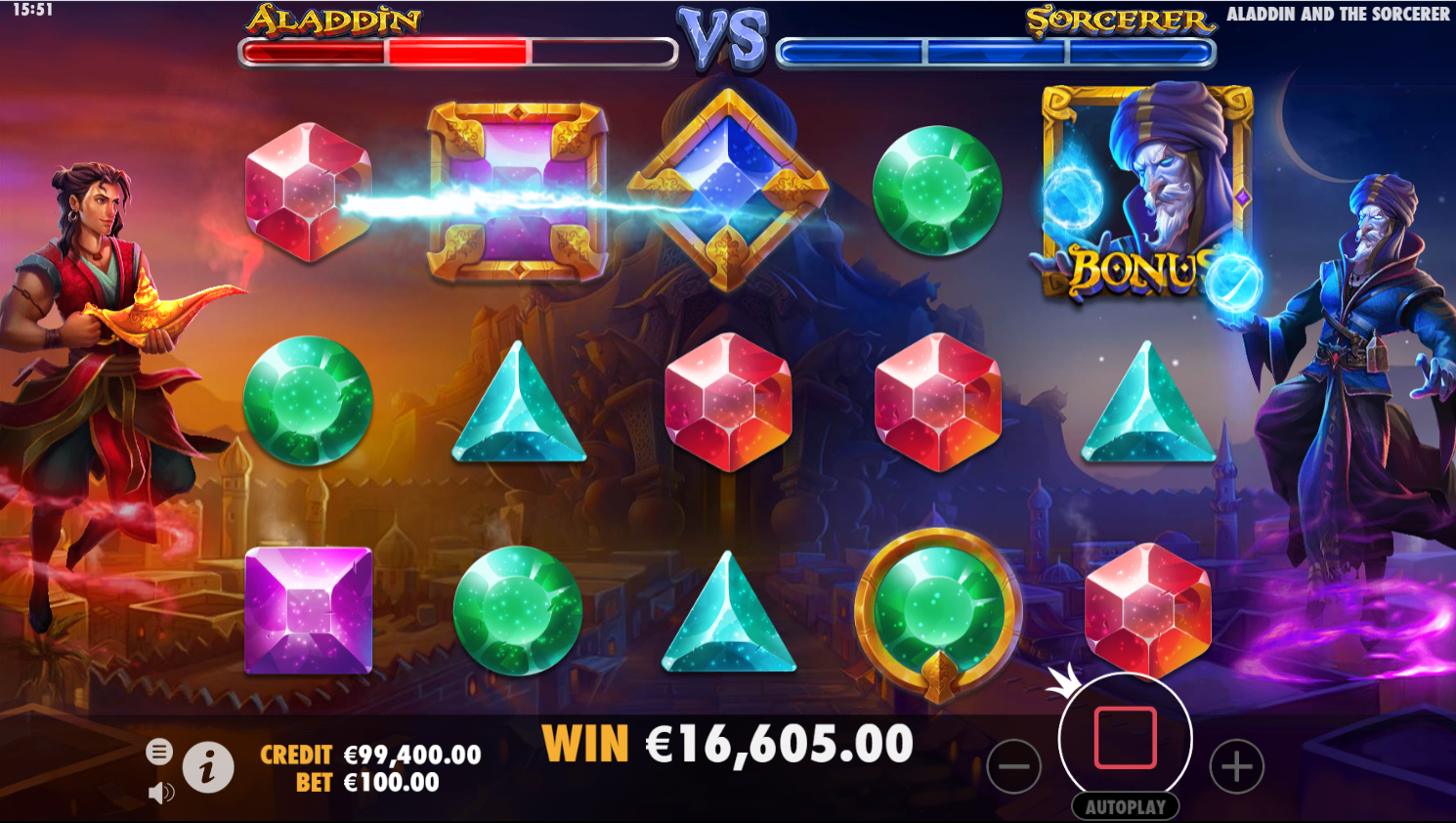 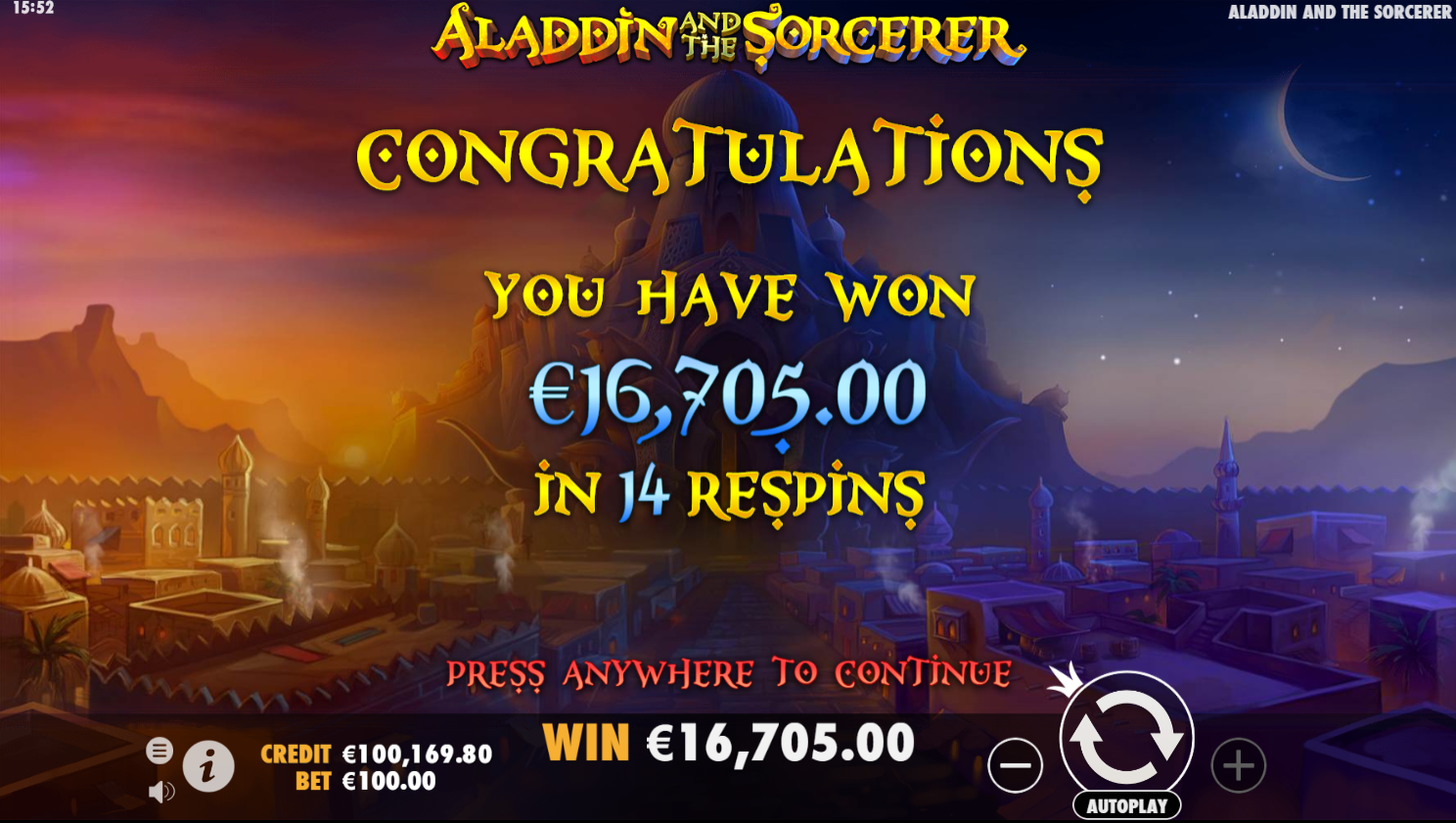 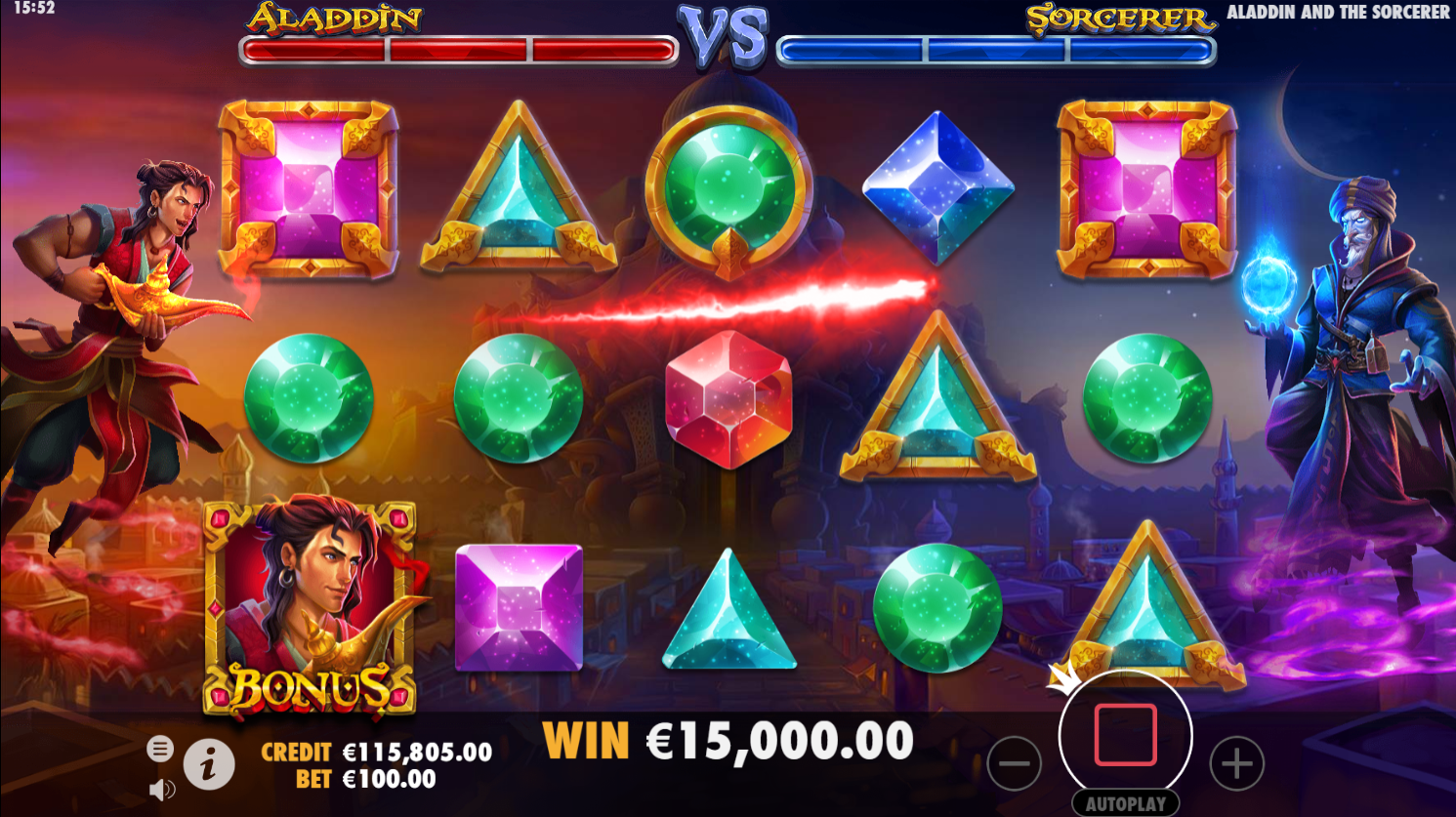 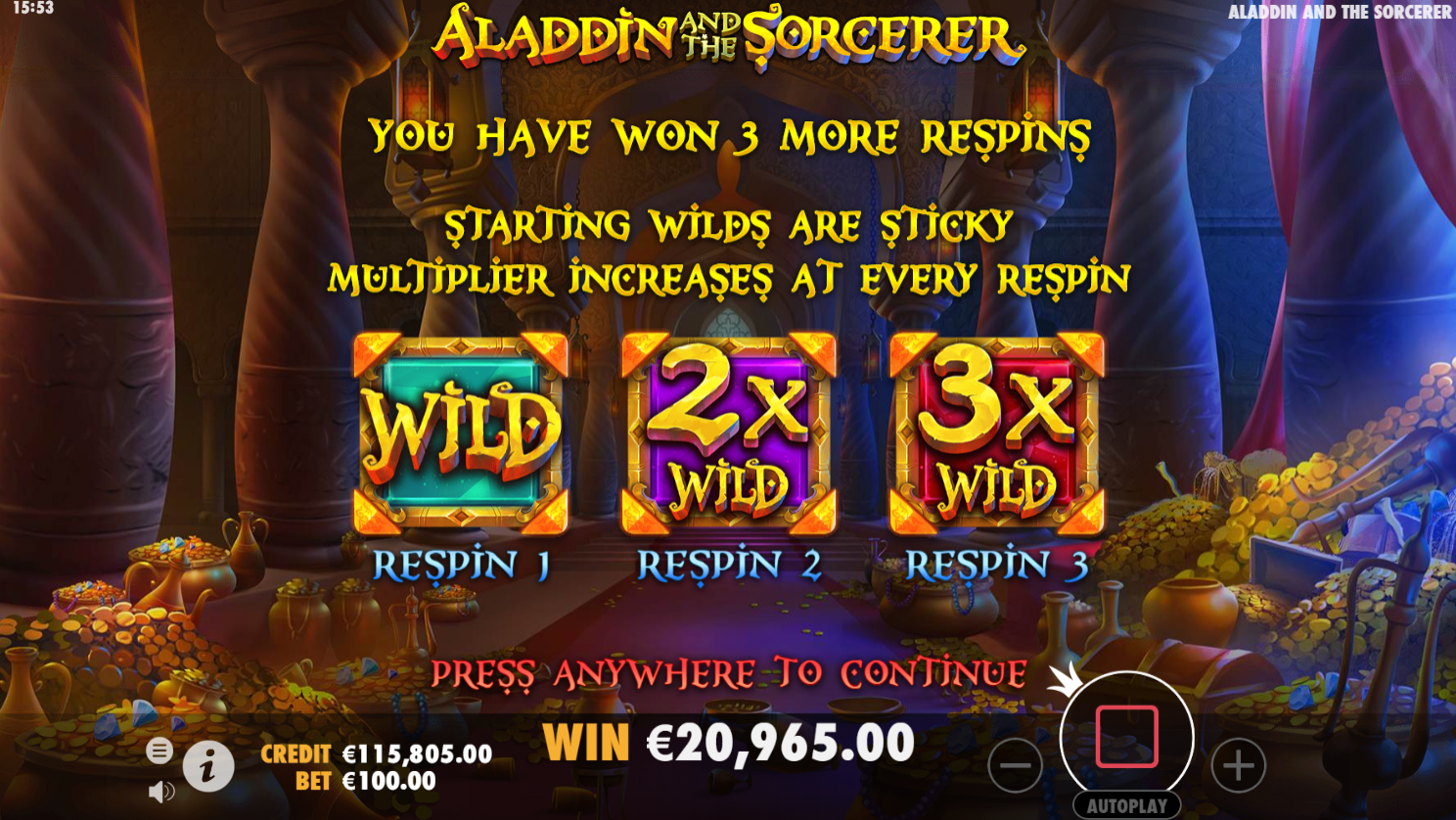 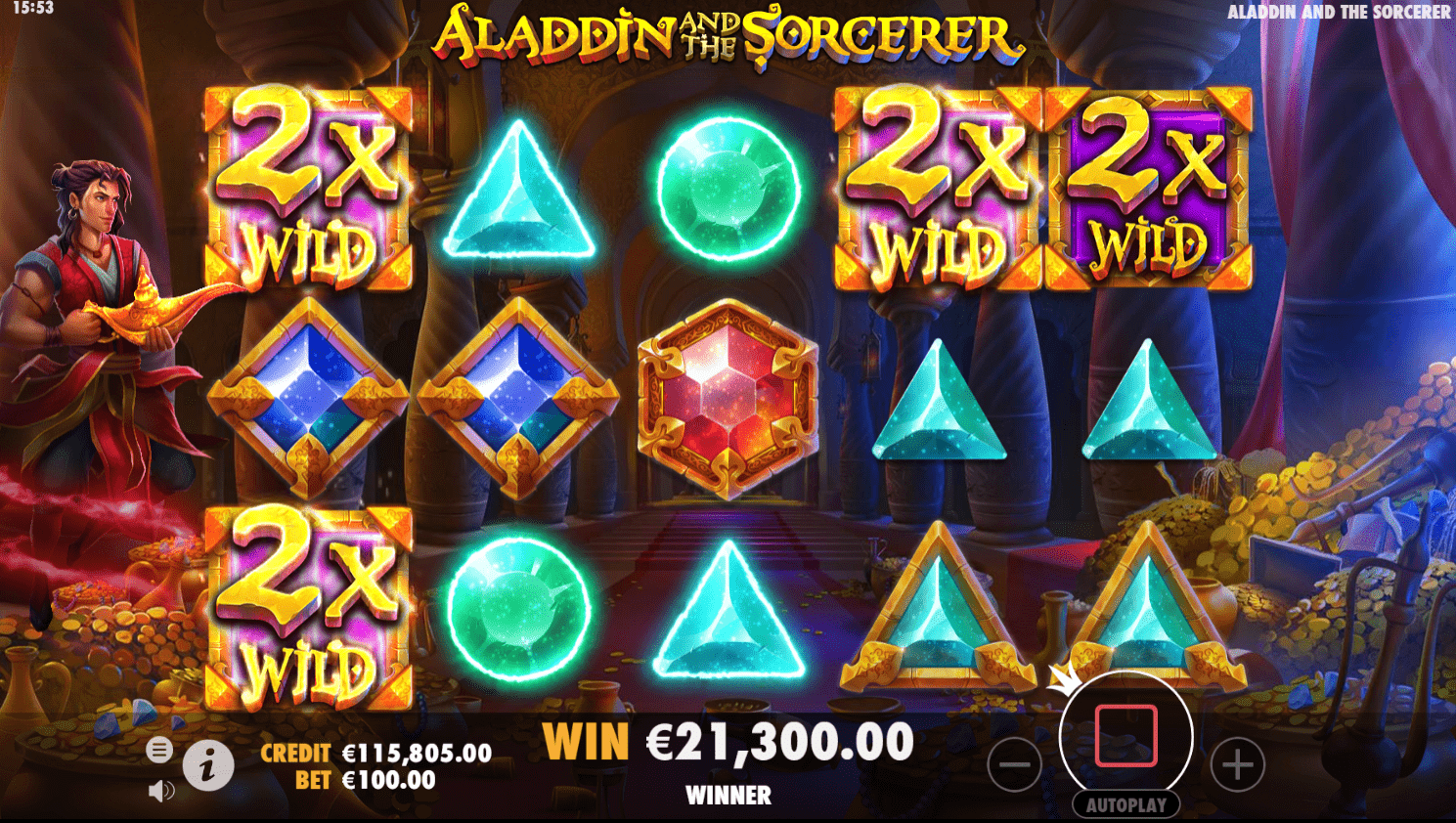 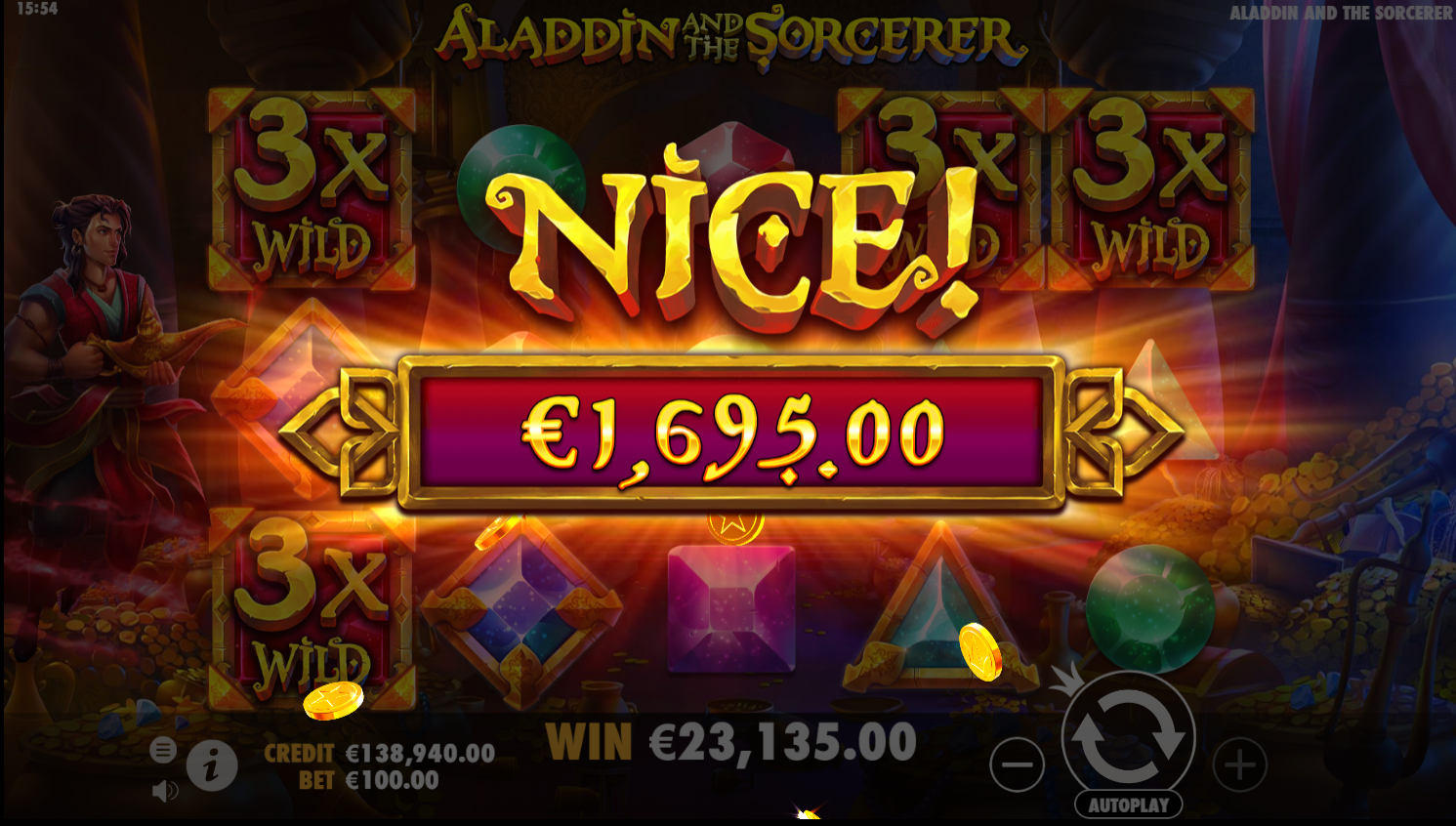 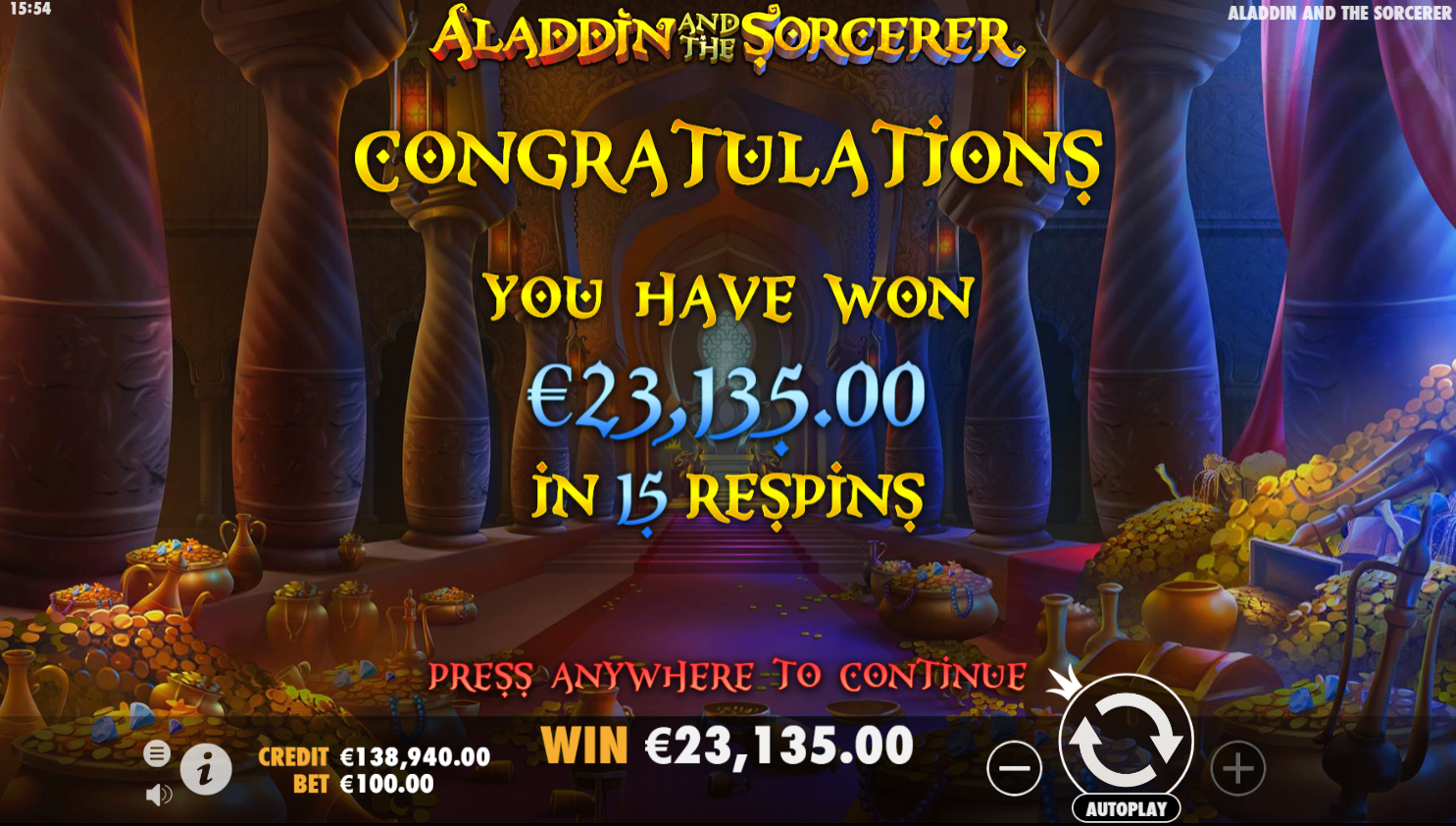